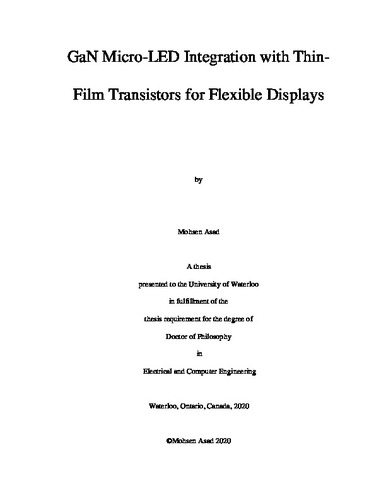 The research presented provides a systematic attempt to address the major challenges for the development of flexible micro-light-emitting diode (LED) displays. The feasibility of driving GaN-based micro-LEDs with a-Si:H-based thin-film transistors by using a thin-film bonding and transfer process was initially proposed. This approach was implemented to create an inverted pixel structure where the cathode of the LED is connected directly to the drain contact of the drive TFT resulting in a pixel circuit having more than 2× higher brightness compared to a standard pixel design. This “paste-and-cut” technique was further demonstrated for the development of flexible displays, enabling the study of the effect of mechanical strain and self-heating of the devices on plastic. Through a finite-element analysis, it was determined that the applied stress-induced strain near the quantum wells of the micro-LEDs are negligible for devices with diameters smaller than 20 microns. Thermal simulation of the LEDs on plastic revealed that a copper bond layer thicker than 600 nm can be used to alleviate self-heating effects of the micro-LEDs. Using these design parameters, micro-LED arrays with 20 micron diameter were integrated onto flexible substrates to validate the theoretical predictions. Further scaling of the LED size revealed substrate bending also tilts the direction of the LED structure, allowing further extraction of light. This effect was demonstrated using nanowire LEDs with a 250 nm diameter transferred onto plastic, where the light output could be enhanced by 2× through substrate bending. Finally, through the removal of bulk defect and surface states, fabrication of highly efficient micro-LEDs having > 400% increase in light output (compared to conventional diodes) was achieved. This outcome was accomplished through the removal of the defective buffer region adjacent to the active layers of the LED and minimization of the non-radiative recombination at the sidewalls. The former was accomplished through the removal of the buffer layer after separation of the LED from the process wafer while the latter is accomplished using a surround cathode gate electrode to deplete free carriers from the sidewall of the forward-biased LED. The resulting performance enhancements provided a basis for high-brightness flexible micro-LED displays developed in this dissertation.