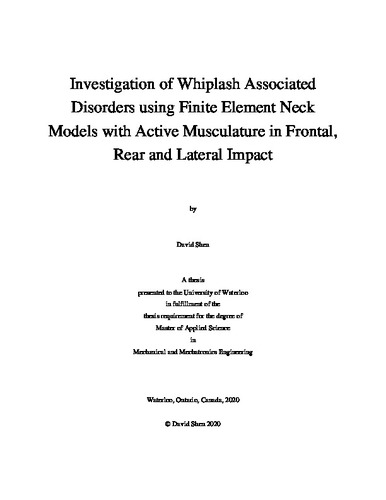 Whiplash associated disorders (WAD) represent one of the most frequent injuries following a motor vehicle collision, with a significant economic cost of $29 billion in the United States and €10 billion in Europe. Although high severity neck injuries associated with high velocity impacts can be fatal, WADs can occur from low speed impact scenarios that can result in acute soft tissue injury, but can transition into chronic symptoms that can be detrimental to the quality of life for the victim. In addition, the female population has been identified to be twice as vulnerable to sustain WADs with twice the risk to develop chronic symptoms, compared to the male population. WADs originate from tissue lesions due to non-physiological motion or excess motion past the physiologic loading range of the cervical spine. Epidemiological data has associated WADs with frontal, rear, lateral impact scenarios, with the rear impact configuration having the largest injury risk. However, the total absolute incidence of WADs from frontal and lateral impacts are equal to or exceed those from rear impacts. Anatomical sites that are susceptible to injury and pain response include the cervical facet joint, spinal ligaments, intervertebral disc, nerve roots and dorsal root ganglia, muscles and vertebral arteries. Injuries that originate from these anatomical sites are difficult to diagnose due to challenges in identifying non-observable macroscopic tissue damage and limitations in current medical imaging techniques. Current methods to investigate WAD include volunteer, post mortem human subject (PHMS), anthropometric test device (ATD), and animal experiments; however, these methods do not include the combination of active muscles, tissue level injury and pain response that are applicable to a human. Detailed finite element (FE) human body models (HBMs) were developed to address some of these limitations, particularly incorporating the effect of active musculature and the ability to predict crash induced injuries (CIIs) at the local tissue level for multidirectional impacts. The objective of the study was to investigate the injury risk at the tissue level following frontal, rear and lateral impact conditions using two HBMs that represent a 50th percentile male and 5th percentile female. In addition, a new muscle activation scheme was developed and applied to the HBMs and the sensitivity of active muscle parameters was investigated for each impact scenario. The head and neck models of the Global Human Body Models Consortium (GHBMC) 50th percentile male (M50-O v.4-5) and 5th percentile female (F05-O v.3-1) were used to investigate the kinematic and tissue level response in 8g frontal, 7g rear and 7g lateral impact conditions. A new open-loop muscle activation scheme was proposed to improve the reflex muscle activation response of both models under all loading conditions. The new activation scheme was applied to an upper and lower bound assessment of muscle activation, based on varying physiologic cross-sectional area (PCSA) and muscle activation onset time from reported literature values, and assessed using head kinematics. Lastly, the male and female models were compared for the various impact conditions (frontal, rear, lateral), based on kinematic response, tissue level response, and the potential for injury risk at the tissue level. The proposed open-loop muscle activation scheme improved the head kinematics outcome, compared to human volunteer tests relative to the baseline muscle activation, for both the M50 and F05 models for all impact directions. The effect of varying PCSA and muscle activation onset time on head kinematics was largest for the lateral impact, compared to frontal and rear impact conditions. The muscle activation strategy affected the neck position in the sagittal plane during the impact, which was sensitive to lateral impacts because increased neck flexion enabled increased lateral bending coupled with increased axial rotation. The kinematic and predicted tissue-level injury risk were similar between the M50 and F05 models for the frontal and rear impact directions, attributed to the confounding effects of both stature and local tissue dimensions. The lateral impact direction predicted the highest injury risk for the capsular ligament, and compression of the nerve root and dorsal root ganglia at the lower cervical vertebral levels for both the M50 and F05 models. No injury risk was predicted by both models in the rear impact condition, although the impact scenario considered was in the transitional region from non-injured to injured as reported in the literature. The low injury risk in rear impact was attributed to the non-physiological facet joint gap and the numerical implementation of the capsular ligament. In addition, the F05 model demonstrated consistently lower head rotational displacement compared to the M50, attributed to the non-physiological planar facet joint profile, which restricted axial rotation of the vertebrae. An average stature male and a small stature female HBM were enhanced with a new open-loop muscle activation strategy resulting in improved head kinematics for frontal, lateral and rear impact scenarios. Assessment at the tissue level demonstrated the highest injury risk in the lateral impact condition for both M50 and F05 models. In general, the injury risk between the M50 and F05 models were similar in the frontal and rear impact conditions due to confounding effects of stature and local neck tissue dimensions, while the lateral impact condition resulted in different capsular ligament post-traumatic injury locations because of the reduced vertebral motion from the non-physiological facet joint cartilage of the F05 model. Application of the upper and lower bound activation scheme demonstrated the highest sensitivity in model response to the lateral impact condition, while the rear impact condition demonstrated the lowest sensitivity. Future research should investigate a range of impact severities to determine the injury tolerance for each impact direction.