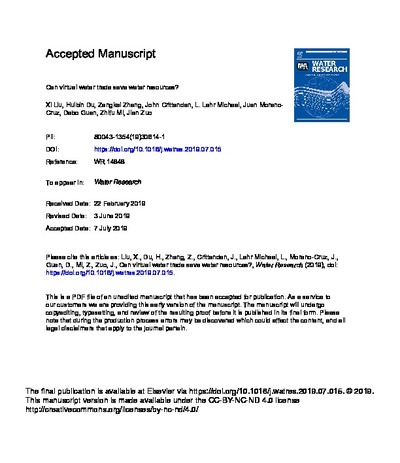 At times, certain areas of China suffering from water shortages. While China's government is spurring innovation and infrastructure to help head off such problems, it may be that some water conservation could help as well. It is well-known that water is embodied in traded goods—so called “virtual water trade” (VWT). In China, it seems that many water-poor areas are perversely engaged in VWT. Further, China is engaging in the global trend of fragmentation in production, even as an interregional phenomenon. Perhaps something could be learned about conserving or reducing VWT, if we knew where and how it is practiced. Given some proximate causes, perhaps viable policies could be formulated. To this end, we employ China's multiregional input-output tables straddling two periods to trace the trade of a given region's three types of goods: local final goods, local intermediate goods, and goods that shipped to other regions and countries. We find that goods traded interregionally in China in 2012 embodied 30.4% of all water used nationwide. Nationwide, water use increased substantially over 2007–2012 due to greater shipment volumes of water-intensive products. In fact, as suspected, the rise in value chain-related trade became a major contributing factor. Coastal areas tended to be net receivers of VWT from interior provinces, although reasons differed, e.g. Shanghai received more to fulfill final demand (67.8% of net inflow) and Zhejiang for value-chain related trade (40.2% of net inflow). In sum, the variety of our findings reveals an urgent need to consider trade types and water scarcity when developing water resource allocation and conservation policies.