Quantifying the Influence of Soil Prescriptions on Ecosystem Processes in Reclaimed Forests of Varying Age in a Post-Oil Sands Landscape in the Athabasca Oil Sands Region, Alberta, Canada 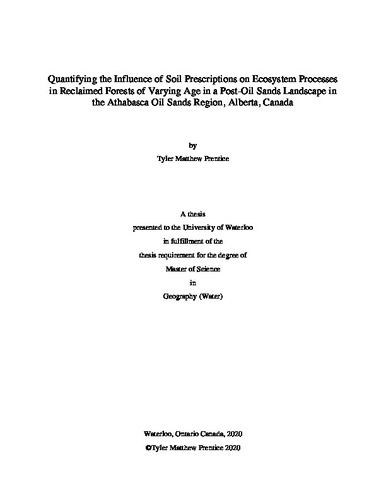 The Athabasca Oil Sands Region (AOSR) in northern Alberta, Canada contains ~4800 km2 available for surface mining, and as of 2017 ~767 km2 had been disturbed for oil sands operations. The Alberta government requires this land to be reclaimed back to an equivalent capacity following the closure of mining operations. This includes the reclamation of upland forests, which serve vital ecosystem functions to the region. These functions are influenced by the cover soils used while reclaiming these ecosystems as they are designed to provide sufficient water and nutrients for the vegetation being planted. There are two different cover soils typically used in reclamation, peat mineral mix (PMM) and forest floor material (FFM), while there have been studies examining the differences between them some of the results are inconsistent. This research aims to further the understanding of how differences in cover soils used can influence the moisture and nutrient regimes of reclaimed forests, and how these processes change as vegetation develops. Seven sites in the AOSR that varied in age, cover soil, and vegetation prescription were used for this study. Differences in soil physical properties were assessed and compared to changes in volumetric water content throughout the growing season to assess their impact on water regimes. Once the relationship between soil physical properties and water regimes were established the nutrient regimes of the sites were assessed through the in situ buried bag method. Similarly, to volumetric water content, nutrient mineralization rates were compared to soil physical properties to assess their impact on the nutrient regimes of the sites. Once the relationship between soil prescription and the water and nutrient regimes were established, how vegetation development can impact these processes could be determined. Soil texture was found to be the dominant driver of water regimes at reclaimed sites, having a greater influence than topographical variables. This led to some sites being re-vegetated incorrectly, which can lead to increased time for vegetation to become established and a potentially longer period before sites can become certified. Furthermore, the type of cover soil and mineral layer used were found to influence soil water regimes, with prescriptions using FFM having higher infiltration rates then PMM, while fine tailings sand mineral layers were more likely to result in water limited systems than overburden material. In contrast the impact soil prescriptions used in reclamation had on nutrient regimes was much smaller then hypothesized. The lack of differences observed between FFM and PMM suggests that five years post-revegetation any initial benefits to the nutrient regimes of the soil will no longer be present. The only parameter that seemed to influence nutrient mineralization rates was silt content, where sites with a higher silt content typically had a slight increase in N, NH4+, and NO3- mineralization. In contrast, litter mineralization rates followed a similar trend to what would typically be observed in natural boreal forests, with broadleaf sites having higher P mineralization rates while NH4+ and N were unrelated to vegetation type. These findings suggested that while soil physical properties have a significant influence on the water regimes of reclaimed sites, they have little impact on nutrient regimes five years post-revegetation. Instead vegetation inputs are the dominant control on nutrient availability. However, soil water regimes drive what vegetation can become established on reclaimed sites. Therefore, when attempting to predict the nutrient regimes of a site it is important to consider the impact soil properties will have on water regimes and how that may impact vegetation colonization, which will ultimately govern the nutrient mineralization rates.