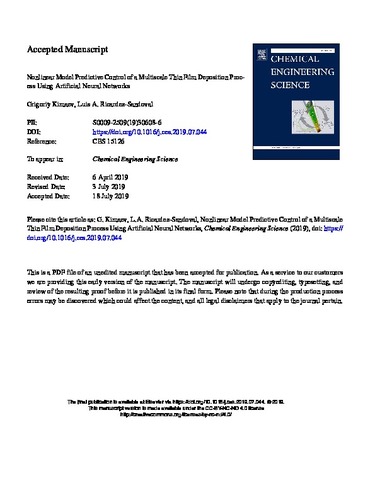 The purpose of this study was to employ Artificial Neural Networks (ANNs) to develop data-driven models that would enable the shrinking horizon nonlinear model predictive control of a computationally intensive stochastic multiscale system. The system of choice was a simulation of thin film formation by chemical vapour deposition. Two ANNs were trained to estimate the system’s observables. The ANNs were subsequently employed in a shrinking horizon optimization scheme to obtain the optimal time-varying profiles of the manipulated variables that would meet the desired thin film properties at the end of the batch. The resulting profiles were validated using the stochastic multiscale system and a good agreement with the predictions of the ANNs was observed. Due to their observed computational efficiency, accuracy, and the ability to reject disturbances, the ANNs seem to be a promising approach for online optimization and control of computationally demanding multiscale process systems.