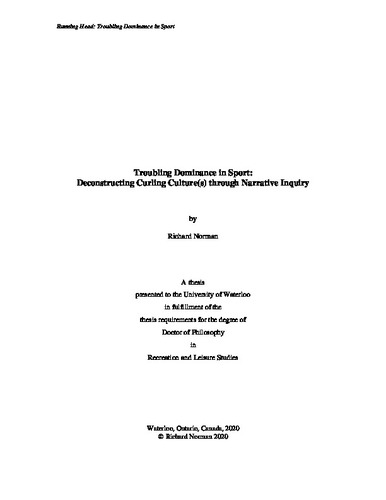 Curling, with its deep history, colonial legacy, and quintessential “Canadianness” (Mair, 2007, 2009) offers a rich context to explore how dominant narratives within a sport may continue to affect diversity and inclusion. For example, one prominent narrative in curling is a commitment to “reflect the changing needs of the cultural mosaic and lifestyles of Canadians” (Curling Canada, 2019b), expressing curling as a sport that is open and welcoming to all Canadians. However, its image continues to present as White, middle-classed, heterosexual, and able-bodied (Curling Canada et al., 2015). The purpose of this inquiry was to explore the role of dominant narratives in curling culture(s) as revealed through the experiences of its participants. Further, the inquiry sought to understand how dominant narratives may reinforce conditions limiting curling’s ability to achieve a vision of a fully inclusive and truly diverse sport. The inquiry used semi-structured interviews to gather participant accounts, which were then analyzed to detect tensions and stresses. Breaking with traditional practices of representing findings, performance text – a form of creative analytic practice (CAP) (Berbary, 2011; Parry & Johnson, 2007; Richardson & St. Pierre, 2005) – was used to explore the complexity of the issues in a dialogic form. The inquiry revealed that persistent questions of “race”, lack of diversity, and of the possibility of decolonizing curling’s past continues to affect curling today. Moreover, the lack of discourse regarding those issues emerged as a significant obstacle contributing to curling’s continued underrepresentation of Indigenous and people of colour. By deconstructing the personal experiences and repurposing tensions into a performative dialogue, the limitations to inclusion in curling are shown directly related to its cultures, where tradition maintains “whiteness” within a colonial frame, and in opposition to an inclusive vision where all Canadians are welcome and represented.