Hurry Up and Wait: Spatial Strategies for Urban Stress Relief 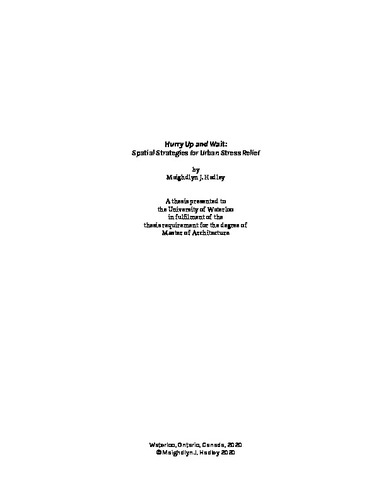 In the midst of rising urban density and its projected impacts on infrastructures and city dwellers alike, the importance of understanding the effects of built space on our biology and mental well-being is becoming essential to responsible spatial design. This thesis casts the designer as a practitioner focused on human impacts and synthesizes the lessons of current environmental psychology theory and mixed-methods biometric research into an analytical design framework to promote stress recovery and restoration. Architectural factors of scale, lighting, social organization, materiality, visual complexity, and enclosure are used as lenses through which to analyse an existing transit terminal and propose a reimagined space for waiting. An identification of waiting rooms as high-opportunity areas within existing urban infrastructures led to the choice of Toronto Coach Terminal as a theoretical site in which to test the framework and to assess the value of restorative waiting environments. The subsequent design exploration takes the form of an open-ended kit of parts which creates seating areas and enclosures through a system of frames, connectors and panels to promote psycho-physiological restoration for a variety of users. Topics of framework development and user testing methodologies are addressed in an attempt to make disciplinary boundaries more porous and to co-solve questions with spatial implications using all available resources. Since both waiting and stress impact city dwellers more severely and the world is becoming increasingly urbanized, better access to and more seamless integration of restorative environments in the incidental spaces of the public realm would play a role in the management of stress at a population level.