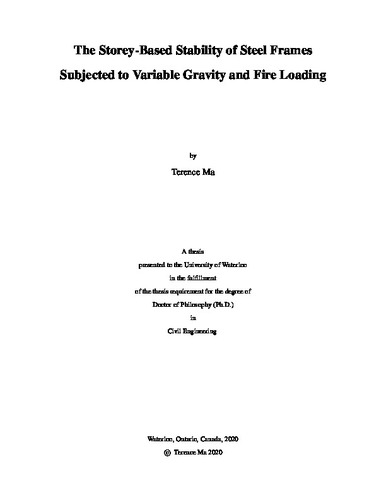 The concept of storey-based stability has been developed over the past several decades, and includes powerful methods to holistically assess the structural integrity of unbraced and semi-braced steel frames. Recently, it has also been applied in variable loading analysis, which unlike traditional proportional loading analysis, aims to determine the worst and best case scenarios of loading which will cause the instability of any such frame. Presented in this thesis are a number of theoretical and analytical methods which extend the field of applicability of the storey-based stability and variable loading analysis concepts, particularly towards the direction of performance-based fire-structural analysis. As building fires commonly occur and are responsible for significant losses of property and life across the world, it is of fundamental importance for structural engineers to understand and design against the instability of a structure subjected to fire conditions. In this study, the concept of storey-based stability analysis is first extended to account for shear and axial deformations in members of the frames. Although these effects are often neglected in traditional structural stability analysis, they may become significant in some cases. The effects of column initial imperfections and lateral loads on the deformations and related failure criteria of a frames are also considered. With these concepts in mind, the storey-based analysis approach is then extended to account for elevated temperatures and various fire scenarios, and the concept of variable loading is extended to consider variable fire and temperature loading instead of gravity loading. The complexity of the problem is then further heightened by considering the presence of stepped members in a frame resulting from longitudinal temperature gradients. Most especially, the post-earthquake fire situation is considered by modelling the damages to both the structure and insulation before applying the appropriate stability analysis equations. The post-earthquake fire scenario deserves special attention since large-scale conflagrations can potentially follow earthquakes during which extinguishing measures are rendered unavailable. Finally, the extension of the storey-based stability and variable gravity loading concepts towards multiple storey frames is achieved in this study, with the capabilities of considering all of the aforementioned conditions. The proposed methods contained in this study provide a comprehensive and robust toolset for holistically evaluating the stability and deformations of structures by considering them as structural systems rather than individual members. As necessary, the use of finite element modelling is used to validate the theoretical accuracy of all of the proposed methods. Finally, some recommendations for further research are proposed with aims to further extend the fields of storey-based stability and variable loading.