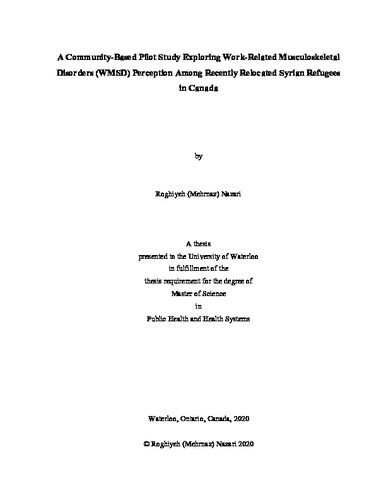 Refugees, a vulnerable population, usually end up in precarious work situations, which are very common in small businesses (SBs). SBs, where 69.7% of the total private labor force is employed, often hire unskilled workers and immigrants to perform manual labor and have few resources for musculoskeletal disorder (MSD) or occupational health and safety (OHS) prevention. A research group at the University of Waterloo has responded to this concern and developed a simple message about proper techniques for manual material handling (MMH) that was found to be a useful preventative approach to convey ergonomics knowledge and potentially lower the burden of MSDs among workers in SBs. This study followed up on research on the simple educational message “Leave objects off the floor” conducted by Binh Ngo in 1995. In his before-after study of the intervention, participants were asked to rate 44 videos of typical lifting tasks, from 0-10, on how likely they believed the task they just saw could eventually lead to a low back injury or low back pain (LBP). Based on the positive outcomes in Ngo’s study, it was hypothesized that this simple educational message could lead to positive outcomes among newly resettled Syrian workers to improve their knowledge of identifying LBP risk factors. Syrian refugees who had been relocated in Ontario, Canada for less than six years were recruited with the help of staff at settlement agencies in Hamilton, Kitchener, and Waterloo. An explanatory sequential mixed-method approach was utilized to understand refugee workers’ knowledge before and after the simple educational message. A total of 92 participants rated the 44 video clips before and after the simple educational message and 15 participated in semi-structured interviews. Statistical analysis of the lifting task rating data illustrated that the study participants were able to correctly identify LBP-associated risks, including the risk factors of vertical height, horizontal distance, weight, twisting, coupling, and repetitive movements with the exception for lifting and lowering. These findings were evident both before and after receiving the simple educational message. A primary hypothesis was that participants would rate more lifting tasks which included the risk factor of vertical height as risker after they were exposed to the educational message (vertical height is the focus of the message). This hypothesis was supported as for the vertical lifting tasks the increase in mean risk ratings in post-tests ranged from 13 to 35%. Analysis of the interview data helped explain specific findings from the ratings of lifting tasks that were unusual or unexpected. For example, for ratings for the task of lifting off the floor using the squat lifting technique were lower than expected and participants explained that they had heard in the past that squatting while lifting was the preferred approach. Similarly, participants ranked lowering objects as less risky than lifting based on their own perceptions when in fact the scientific evidence does not support differences in risk. An important message from the study is that simple messages can be effective but will be less effective if past experience/knowledge of participants is discordant. The interviews provided rich information regarding factors contributing to MSD development in refugee workers. Findings suggest that due to the usual gradual onset of symptoms in the early stages, alongside the general lack of knowledge, MSDs are not considered a serious health concern. Many accept its development as a natural part of the work experience, and thus inevitable. Participants described how institutional and personal barriers played a role in their exposure to MSD risk factors in Canadian workplaces and their reluctance to report hazardous conditions even if they experienced musculoskeletal pain. Many participants reported to be lax about protecting themselves from work-related hazards when faced with the demands of their jobs and other factors that discouraged safe work practices. These influential considerations included environmental factors, e.g., managers’ attitudes which focused more on customer service or productivity, MSDs being seen as less important than injuries and accident prevention, small businesses being in a survival mode with no resources for MSD prevention, participants’ own economic transition and their need to keep their job, as well as different levels of discrimination embedded in workplace structures.