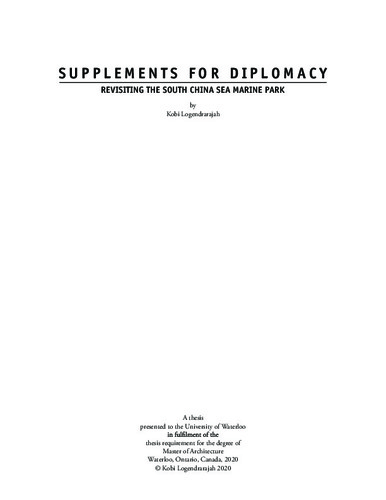 With its reputation of its diverse fisheries, latent oil reserves, and its strategic economic position in global trade, the South China Sea has historically been a site of contention between states. Today, we find this contention in the intersection of multiple claims between regional powers: China, Vietnam, the Philippines, Malaysia, Brunei, and Taiwan. The lack of consensus regarding how to delineate territory has led states to view the region as a ‘petri dish’ – experimenting with de-facto delineations of territory. Each state attempts to build a case to justify their claim to the sea by using an arsenal of spatial tools that brings agency to the built form. We see civilian occupied islands like Pag-asa Island, which is owned by the Philippines, and the militarized artificial islands like Fiery Cross Reef, constructed by China. Naval flotillas and FONOPs (Freedom of Navigation Operations) begin to act as quasi-informal boundaries of sovereignty, as they inform the spatial mobility in the sea. As a result of the territorial and maritime dispute in the South China Sea, an evident gap has formed in the management of resources, leading to the neglect of the region’s ecosystem and maritime security. The lack of coordination among countries has led to unregulated fishing, thereby contributing to overfishing in the region - to the point where its fisheries are on the brink of collapse. Along with the depleting fish stocks, the activity of illegal poachers has deteriorated the health of the coral reefs. These habitats serve as critical spawning grounds for marine species in the South China Sea. State-run infrastructural projects veiled under “national security” have compromised the well-being of the region’s ecosystem. This includes the construction of artificial islands, which involves extensive land reclamation techniques that have contributed to the declining health of coral reefs. Supplements for Diplomacy reframes the agency of the built-form in the South China Sea. It advocates for a shift, from state-centric to non-state-centric processes - specifically resources that support marine species. This thesis revisits a proposal brought forth by marine biologist John McManus, who advocated for transforming the region into an international marine protected area. This proposal calls to organize state and non-state actors in a collective body that acknowledges the region’s economic dependency on its ecosystem and biodiversity. By using this proposal as a framework to bridge environmental objectives with state incentives, this thesis illustrates the implementation of the marine protected area’s planning, governance, and infrastructure. Supplements for Diplomacy presents a scalable model that can transition existing occupied islands into environments that serve as spawning grounds for endangered marine species. It relies on the incremental phasing of infrastructure that aims to monitor, build ecological resilience, and to establish a sustainable economy through tourism and revenue from long-term conservation of fish stocks. Through the reprogramming of state-occupied islands, this thesis poses a new relationship we have with the disputed region - one where we take on the role of the steward. Territory is no longer seen as strategic token exploited by the state, rather it consists of large moving systems involving nutrient flows