Integration of design and control for large-scale applications: a back-off approach 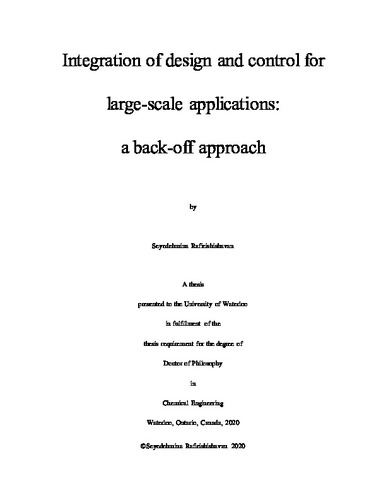 Design and control are two distinct aspects of a process that are inherently related though these aspects are often treated independently. Performing a sequential design and control strategy may lead to poor control performance or overly conservative and thus expensive designs. Unsatisfactory designs stem from neglecting the connection of choices made at the process design stage that affects the process dynamics. Integration of design and control introduces the opportunity to establish a transparent link between steady-state economics and dynamic performance at the early stages of the process design that enables the identification of reliable and optimal designs while ensuring feasible operation of the process under internal and external disruptions. The dynamic nature of the current global market drives industries to push their manufacturing strategies to the limits to achieve a sustainable and optimal operation. Hence, the integration of design and control plays a crucial role in constructing a sustainable process since it increases the short and long-term profits of industrial processes. Simultaneous process design and control often results in challenging computationally intensive and complex problems, which can be formulated conceptually as dynamic optimization problems. The size and complexity of the conceptual integrated problem impose a limitation on the potential solution strategies that could be implemented on large-scale industrial systems. Thus far, the implementation of integration of design and methodologies on large-scale applications is still challenging and remains as an open question. The back-off approach is one of the proposed methodologies that relies on steady-state economics to initiate the search for optimal and dynamically feasible process design. The idea of the surrogate model is combined with the back-off approach in the current research as the key technique to propose a practical and systematic method for the integration of design and control for large-scale applications. The back-off approach featured with power series expansions (PSEs) is developed and extended to achieve multiple goals. The proposed back-off method focuses on searching for the optimal design and control parameters by solving a set of optimization problems using PSE functions. The idea is to search for the optimal direction in the optimization variables by solving a series of bounded PSE-based optimization problems. The approach is a sequential approximate optimization method in which the system is evaluated around the worst-case variability expected in process outputs. Hence, using PSE functions instead of the actual nonlinear dynamic process model at each iteration step reduces the computational effort. The method mostly traces the closest feasible and near-optimal solution to the initial steady-state condition considering the worst-case scenario. The term near-optimal refers to the potential deviations from the original locally optimum due to the approximation techniques considered in this work. A trust-region method has been developed in this research to tackle simultaneous design and control of large-scale processes under uncertainty. In the initial version of the back-off approach proposed in this research, the search space region in the PSE-based optimization problem was specified a priori. Selecting a constant search space for the PSE functions may undermine the convergence of the methodology since the predictions of the PSEs highly depend on the nominal conditions used to develop the corresponding PSE functions. Thus, an adaptive search space for individual PSE-optimization problems at every iteration step is proposed. The concept has been designed in a way that certifies the competence of the PSE functions at each iteration and adapts the search space of the optimization as the iteration proceeds in the algorithm. Metrics for estimating the residuals such as the mean of squared errors (MSE) are employed to quantify the accuracy of the PSE approximations. Search space regions identified by this method specify the boundaries of the decision variables for the PSE-based optimization problems. Finding a proper search region is a challenging task since the nonlinearity of the system at different nominal conditions may vary significantly. The procedure moves towards a descent direction and at the convergence point, it can be shown that it satisfies first-order KKT conditions. The proposed methodology has been tested on different case studies involving different features. Initially, an existent wastewater treatment plant is considered as a primary medium-scale case study in the early stages of the development of the methodology. The wastewater treatment plant is also used to investigate the potential benefits and capabilities of a stochastic version of the back-off methodology. Furthermore, the results of the proposed methodology are compared to the formal integration approach in a dynamic programming framework for the medium-scale case study. The Tennessee Eastman (TE) process is selected as a large-scale case study to explore the potentials of the proposed method. The results of the proposed trust-region methodology have been compared to previously reported results in the literature for this plant. The results indicate that the proposed methodology leads to more economically attractive and reliable designs while maintaining the dynamic operability of the system in the presence of disturbances and uncertainty. Therefore, the proposed methodology shows a significant accomplishment in locating dynamically feasible and near-optimal design and operating conditions thus making it attractive for the simultaneous design and control of large-scale and highly nonlinear plants under uncertainty.