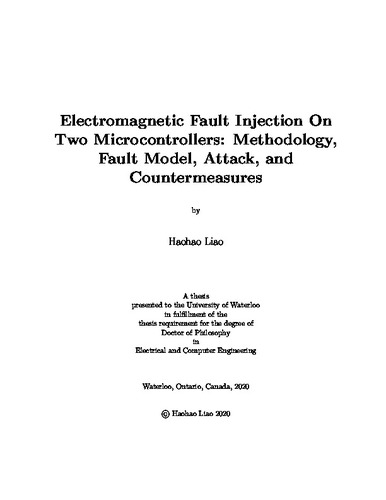 Cryptographic algorithms are being applied to various kinds of embedded devices such as credit card, smart phone, etc. Those cryptographic algorithms are designed to be resistant to mathematical analysis, however, passive Side Channel Attack (SCA) was demonstrated to be a serious security concern for embedded systems. These attacks analyzed the relationship between the side channel leakages (such as the execution time or power consumption) and the cryptographic operations in order to retrieve the secret information. Various countermeasures were proposed to thwart passive SCA by hiding this relationship. Another different type of SCA, known as the active SCA is Fault Injection Attack (FIA). FIA can be divided into two phases. The first one is the fault injection phase where the attacker aims at injecting a fault to a target circuit with a specific timing and spatial accuracy. The second phase is the fault exploitation phase where the attacker exploits the induced fault and forms an attack. The major targets for the fault exploitation phase are the cryptographic algorithms and the application-sensitive processes. Over the last one and a half decades, FIA has attracted expanding research attention. There are various techniques which could be used to conduct an FIA such as laser, Electromagnetic (EM) pulse, voltage/clock glitch, etc. EM FIA achieves a moderate spatial resolution and a high timing resolution. Moreover, since the EM pulse can pass through the package of the chip, the chip does not need to be fully decapsulated to run the attack. However, there remains a lack of understanding of the fault injected to the cryptographic devices and the countermeasures to protect them. Therefore, it is important to conduct in-depth research on EM FIA. This dissertation concentrates on the study of EM FIA by analyzing the experimental results on two different devices, PIC16F687 and LPC1114. The PIC16F687 applies a two-stage pipeline with a Harvard structure. Faults injected to the PIC16F687 resulted in instruction replacement faults. After analysis of detailed experiments, two new Advanced Encryption Standard (AES)-128 attacks were proposed and empirically verified using a two-step attack approach. These new AES attacks were proposed with lower computational complexity unlike previous Differential Fault Analysis (DFA) algorithms. Instruction specific countermeasures were designed and verified empirically for AES to prevent known attacks and provide fault tolerant protection. The second target chip was the LPC1114, which utilizes an ARM Cortex-M0 core with a three-stage pipeline and a Von Neumann structure. Fault injection on multiple LDR instructions were analyzed indicating both address faults and data faults were found. Moreover, the induced faults were investigated with detailed timing analysis taking the pipeline stall stage into consideration. Fault tolerant countermeasures were also proposed and verified empirically unlike previous fault tolerant countermeasures which were designed only for the instruction skip fault. Based on empirical results, the charge-based fault model was proposed as a new fault model. It utilizes the critical charge concept from single event upset and takes the supply voltage and the clock frequency of the target microcontroller into consideration. Unlike previous research where researchers suggested that the EM pulse induced delay or perturbation to the chip, the new fault model has been empirically verified on both PIC16F687 and LPC1114 over several frequencies and supply voltages. This research contributes to state of the art in EM FIA research field by providing further advances in how to inject the fault, how to analyze the fault, how to build an attack with the fault, and how to mitigate the fault. This research is important for improving resilience and countermeasures for fault injection attacks for secure embedded microcontrollers.