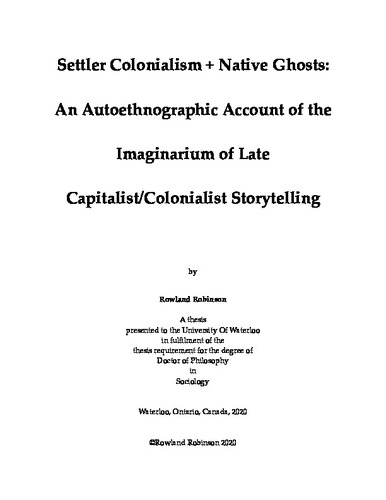 This dissertation is an Indigenous, decolonial, and autoethnographic account of the genealogical formation and function of Nativeness within biopolitical formations and racializing assemblages, as well as the visual, ontological, narrative, and affective imaginings of the northern bloc of settler colonialism (the United States and Canada). As an autoethnographic work it centres my own lived and embodied experiences to chart the corridors of settler-colonial power and knowledge production, in particular my experiences as a diasporic, urban and liminally enrolled Native person, and the very real, and at times overwhelming, affective burdens that come with such a positionality. In doing so this work situates my journey within the structures of settler colonialism, and in particular against what the late Patrick Wolfe referred to as the “logic of elimination,” as well as what many scholars have identified and referred to as the Coloniality of Power and the Colonial Order of Things. Further, it works to centre Indigenous resurgence, insurgence, decolonization, self-determination, and a politics of refusal. In thinking through in particular the centering of practices of refusal, this work proposes and engages in a kind of methodological-pedagogical-praxiological movement of autoethnographic refusal, where the dissertation begins its first of two narrative movements by charting Indigenous damage narratives within frames of political ontology, biopolitics and racializing assemblages, visuality, and community loss and disruption, before moving towards actively no longer telling those stories. The second narrative movement of this dissertation moves then from telling of my own stories of damage under settler-colonial regimes of power/knowledge, towards theorizing about Native damage narratives, most especially why they are so readily consumed within digital, filmic, and academic settings and the economies of late capitalism/colonialism. This is referred to within as the imaginarium of late capitalist/colonialist storytelling. In doing so, it continues to ask fundamentally onto-existential questions about Natives through frames of Savageness and Wildness, temporality, and what the late cultural theorist Mark Fisher referred to as the Weird.