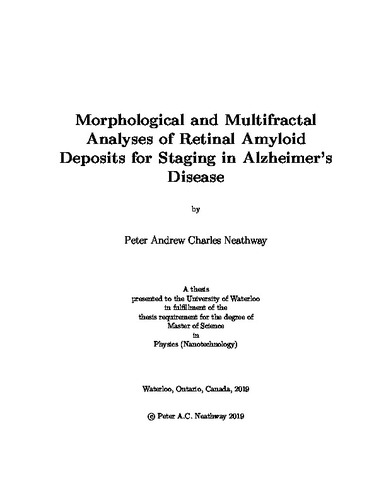 Dementia is a neurodegenerative condition that leads to loss of cognitive ability, typically in older adults. Alzheimer's disease (AD) is the most common cause of dementia and affects millions of people worldwide. The prominence and impact of AD is expected to intensify in the near future, especially in Canada, as the world's population continues to age. Current treatments for AD can delay symptoms, but there is no cure that has been made available to the general population. Detection of AD has been at the forefront of the medical sciences for decades but still involves expensive and inaccessible procedures. Dr. Campbell's group has shown that amyloid deposits, a hallmark of AD in the brain, also occur in the retina, in quantities correlated with brain pathology. The optical accessibility of the retina makes it a strong candidate for future diagnostic methods. In preparation for the implementation of a live-eye imaging device, our group has continued to seek new means for extracting information related to said deposits that could be of diagnostic interest. This thesis includes a description of the three-dimensional morphological features of amyloid deposits found in the retina, with proposed explanations for said features. Most deposits appear to be very flat, like sheets in the en face plane, and bear little resemblance to the typical isotropic deposits found in the brain. This thesis applied complexity and texture analysis to differentiate between key categories of amyloid deposits in human retinas. Texture analysis and polarization signals were both different on average for deposits in different layers of the retina, deposits from subjects with different likelihoods of AD, and deposits from subjects with AD from those with other pathologies. Tests were performed to assess the resilience of these methods to various resolutions (using both digital resampling and different magnifications in the imaging apparatuses) and orientations. Further analysis considered deposit texture as a function of depth in three-dimensional image volumes and found that texture appears to be somewhat continuous, to an extent that may be useful for the live-eye imaging application.