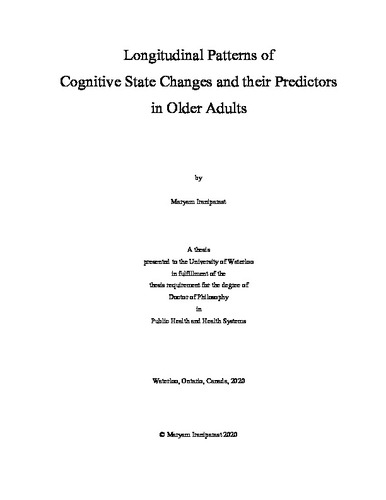 Older adults experience diverse patterns of cognitive state changes, including progression to dementia, that depend on genetic and non-genetic factors. With population aging, the global prevalence of dementia is rising. Given limited treatment success, research focusing on patterns of cognitive state changes and their predictors provides information for older adults and opens windows to develop interventions for preventing or delaying the onset of dementia. This dissertation is based on analyzing secondary data from the Nun Study, a longitudinal study of aging and cognition. The first aim of this dissertation was to identify patterns of changes over time in cognitive states among older adults using a clinically-driven approach and a statistical modeling method, and to compare the patterns identified using these two methods. The second aim was to test and quantify how academic achievement—educational attainment and academic performance in high school—is associated with cognitive state changes and contributes to cognitive reserve. The third aim was to test the potential antagonistic pleiotropy effect of the gene apolipoprotein E (APOE) on cognition. To identify the patterns of cognitive state changes (Aim 1), homogeneous trajectories were grouped together using two different approaches: 1) a clinically-driven approach, and 2) a statistical modeling approach, latent class mixed-effects modeling (lcmm). Using the clinically-driven approach, seven patterns were identified based on whether individuals experienced stable or non-stable trajectories and among non-stable trajectories, whether they experienced a reverse transition to an improved cognitive state, whether they developed dementia or both. These seven trajectories ranged from stable normal cognition to stable dementia. These patterns were preferred to the four classes identified using latent class mixed-effects modeling. This preference was based on the higher level of detail in trajectories captured by the clinically-driven approach compared to the latent classes identified using the lcmm approach. These details include distinguishing between trajectories with and without cognitive improvement, and with and without progression to dementia. The patterns of cognitive state changes based on the clinically-driven approach were then used as the cognitive outcomes to address the two additional aims, with stable dementia used as the reference category. Using multinomial logistic bias reduction regression, the potential presence of cognitive reserve among individuals with higher academic achievement was tested (Aim 2). Adjusting for age and APOE, higher educational attainment (i.e., a graduate degree) was associated with higher odds of experiencing three healthier patterns of cognitive state changes. Higher overall academic performance was significantly associated with experiencing stable cognitive impairment or cognitive impairment without dementia; this effect was mostly due to higher performance in algebra rather than performance in English, Latin, or geometry courses. Higher academic achievement, as evidenced by educational attainment or performance in high school courses, was thus associated with cognitive reserve through experiencing healthier patterns of cognitive trajectories versus experiencing stable dementia. To test the potential antagonistic pleiotropy effect of APOE on cognition, the effect of APOE-ε4 on both early- and late-life cognition was investigated (Aim 3). In addition, the potential modifying effect of higher education among APOE-ε4 carriers was tested. APOE-ε4 was not significantly associated with an early-life measure of cognition (educational attainment); however, among individuals with lower education, APOE-ε4 was associated with experiencing the most impaired cognitive pattern (stable dementia) in late life. This research did not support the antagonistic pleiotropy hypothesis for APOE; however, it did support the scaffolding theory of aging and cognition. Higher educational attainment among APOE-ε4 carriers compensated for the detrimental effects of APOE-ε4 on late-life cognition to the extent that APOE-ε4 carriers with high educational attainment (a graduate degree) showed cognitive aging patterns similar to APOE-ε4 non-carriers. This modifying effect of higher education on the association between APOE-ε4 and late-life cognition suggests that higher education is associated with cognitive reserve even among APOE-ε4 carriers. This dissertation provides information on patterns of cognitive state changes and their predictors in older adults that will benefit older adults, their families, and the healthcare system. Patterns of cognitive trajectories among older adults are diverse, complex, and difficult to identify. Advanced statistical approaches and their software applications are developed for modeling complex longitudinal cognitive trajectories; however, integrating clinically-driven approaches in identifying distinct patterns of cognitive state changes is beneficial. The results of this dissertation show that higher academic achievement may increase the odds of cognitive reserve by leading to healthier cognitive trajectories. While APOE-ε4 and older age are non-modifiable risk factors for dementia, it may be possible to compensate for their detrimental effects through a modifiable factor, such as graduate-level education. Therefore, investing in higher education is an important potential intervention that may prevent or delay dementia even among individuals carrying a genetic risk factor. Furthermore, it may be worthwhile for researchers targeting APOE to develop interventions that consider non-genetic factors that may modify the effect of APOE on cognition.