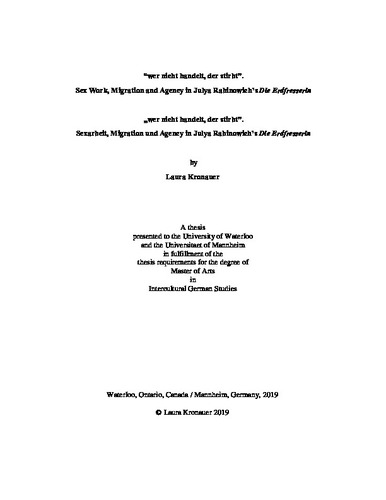 This thesis examines the depiction of migration and sex work through the lens of agency in Julya Rabinowich's Die Erdfresserin (2012). Most research present the novel's character – a Russian sex worker who migrates to Austria – as a victim of structural inequalities caused by political and cultural transformations after the fall of the Soviet Union. Even though the figure’s precarious living and working conditions should not be denied, I argue that the effects of repressive actions are reproduced, if her ability to act is masked out by victimizing representations. An agency-enhanced analysis is therefore crucial to not reproduce existing exclusions and allows for a much more versatile image, without taking the risk of simplified narratives. Against this background, I claim that the Erdfresserin negotiates agency through a wide spectrum of performative strategies that include processes of ‘doing gender' and ‘ethnicity’ as well as resistant practices of criticism and resignification. The aim of the present work is to examine the various levels of agency against the background of social and discursive structures. I will show how the figure fights against or accepts positions assigned to her by discourse and the way she generates new subject positions that can contradict each other. Drawing on poststructuralist methods and intersectional theories, this investigation will answer the following question: What subject positions dos the protagonist negotiates for herself in the process of migration and sex work? What role do social categories such as gender, class, body, etc. play during the process? Which strategies does the figure employ to perceive herself as an autonomous subject and to open up the scope for action? To answer the questions, I will first establish a theoretical and methodological framework that explains concepts about discourse and subjectivity in relation to agency. Building on that, the following chapter investigates the character’s motivation to enter the sex industry and to pursue her migration project to Vienna. From here, I will analyze the protagonist's multiple strategies to transgress social, territorial, and cultural demarcations. After investigating intersubjective negotiations of agency, the last analytical chapter deals with the dialectical tension between identity loss and agency. Here, I focus on the function of earth eating and omnipotence fantasies. In the concluding chapter, I present the results of my analysis and identify further research questions.