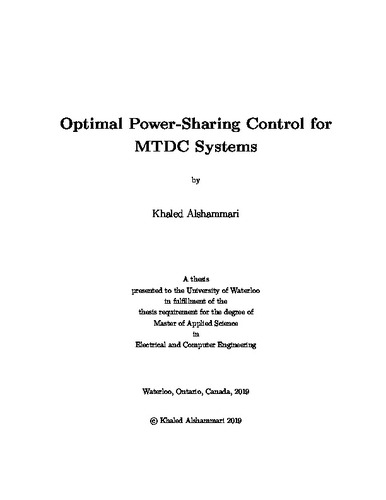 Power systems have been developing over the past few decades, especially in terms of increasing efficiency and reliability, as well as in meeting the recent rapid growth in demand. Therefore, High Voltage Direct Current (HVDC) systems are considered to be one of the most promising and important contenders in shaping the future of modern power systems. A number of trends demonstrate the need to implement Multi-terminal Direct Current (MTDC) systems, including the integration into the conventional grid of renewable energy resources such as photovoltaic (PV) and offshore wind farms. The transmission of power from or to remote areas, such as the North Sea in Europe, is another initiative that is required in order to meet the high demand for power. The interconnection between countries with different levels of frequencies over a long distance is a fundamental application of HVDC grids as well as hybrid AC/DC transmission systems. The industry has also played an essential role in the accelerated progress in power electronics devices regarding cost and quality. Consequently, Voltage Source Converter based-High Voltage Direct Current (VSC-HVDC) systems has recently attracted considerable attention in the research community. This type of HVDC systems has a significant advantage over the classic Current Source Converter based-HVDC (CSC-HVDC) in terms of the independent control of both active and reactive power. Since VSC-HVDC is now being implemented in various applications, this requires a close examination of the behavior of both the economic and operational issues of both VSC-HVDC stations and MT-HVDC systems. This thesis proposes an optimal power-sharing control of MT-HVDC systems using a hierarchical control structure. In the proposed control scheme, the primary control is decentralized and operated by a DC voltage droop control. This method regulates the voltage source converters (VSCs) and guarantees a stable DC voltage throughout the system even in the presence of sudden changes in power flow. A centralized optimal power flow (OPF) is implemented in the secondary control to set the droop gains, and voltage settings in order to fulfil a multi-objective function. This aims at minimizing the losses in DC grid lines and converter stations by an optimization algorithm, namely Semidefinite Programming (SDP). Therefore, an optimal power-sharing result is achieved taking into consideration the losses of both transmission lines and converters, as well as failure intervals of the system. The proposed control scheme was tested on a modified CIGRE B4 DC grid test system based on the PSCAD/EMTDC and MATLAB in which the primary control was designed and simulated in the former, whereas the latter was used to run the SDP algorithm.