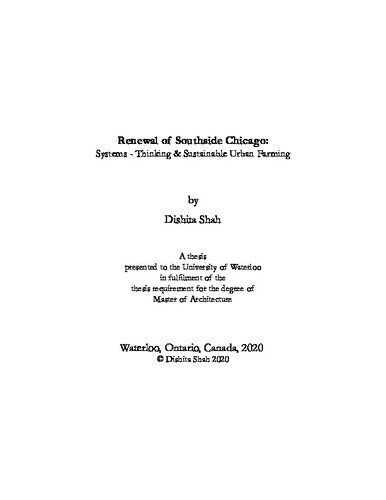 The city of Chicago is one of the largest cities in the United States of America and has a long history as a manufacturing hub. However, over the last fifty years, its role as a manufacturing Centre has declined. This decline has led to job loss and significant erosion of urban fabric. Today the city of Chicago is seen as two cities. The divide in Chicago is due to both economic and social conditions, which in turn are amplified by longstanding forms of institutional racism legal, economic, political, and social-inequalities that have marginalized communities. These communities become split off from the better-resourced neighborhoods. This process, known as ‘Redlining,’ has resulted in food deserts where economically disadvantaged neighborhoods do not have access to fresh food produce. These food deserts have become an underlying cause for these people’s chronic health issues and contribute to the decline of both social and urban fabric. This thesis explores the role of urban farming in rehabilitating neglected neighborhoods, exploring a systemic approach across a range of different scales. This thesis envisions repurposing empty lots in the Westside and Southside of Chicago. The idea is to introduce prototypes of urban farming and sustainable energy production. The scale ranges from single family home lots to industrial lots. The thesis proposes an interdependent approach to development using bio-waste to generate energy. The integration of building systems, social and economic forces leading to urban rehabilitation are the key drivers of this thesis.