The Stability of the Drygalski Ice Tongue 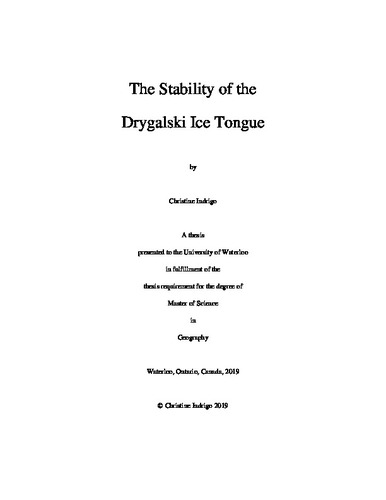 Antarctica has the potential to contribute to sea-level rise by up to 58 m if it were to entirely melt. The Antarctic Ice Sheet is fringed by floating ice in the form of ice shelves and ice tongues, which help to buttress and slow the flow of grounded ice into the ocean. Monitoring the stability of these ice shelves and ice tongues is increasingly important in a warming world, as several areas of floating ice across Antarctica are already experiencing considerable mass loss and thinning due to warming air and ocean conditions. The primary goal of this thesis is to examine several factors contributing to the stability of the Drygalski Ice Tongue in East Antarctica using a combination of remote sensing imagery analysis and subglacial hydrology modelling. The Drygalski Ice Tongue is ~140 km long with an unconfined length of 90 km extending into the Ross Sea. This unconfined length influences local ocean conditions and has a significant control on the size of the nearby Terra Nova Bay polynya, keeping the area free of sea ice. The ice tongue has experienced three large scale calving events in its recorded history since the early 1900s. In this study, Landsat imagery from 1988 to 2018 is used to track the advance of the ice tongue, marginal fracture propagation, and to derive velocity using manual feature tracking. The Glacier Drainage Systems (GlaDS) model is applied to the David Glacier catchment, which feeds into the ice tongue, to reveal the locations and discharge from subglacial channels along the grounding line. These channels are compared with basal channels beneath the floating ice tongue that are identified using airborne radar-derived ice thickness and hydrostatically-derived ice thickness, which can reveal channels in basal draft beneath the ice tongue. The results of this study propose a cyclical relationship between the occurrence of large calving events and large marginal fracture formation, in which large calving events result in the formation of new large fractures where the ice tongue emerges from the coast. When these fractures advance to the ice front, they create an area of weakness where future large calving events can occur. The model output produces three subglacial channels at the grounding line, which align with three channels identified through ice thickness. The propagation of the marginal fractures into the width of the ice tongue is controlled by the presence of these basal channels, as fractures can propagate through the areas of thinner ice in the centre of the northmost channel and stops once they reach the channel keel where ice is thicker. These findings provide insight on the roles that subglacial hydrology, ice draft, and marginal rifting have on ice tongue stability for the Drygalski Ice Tongue and for other floating ice bodies.