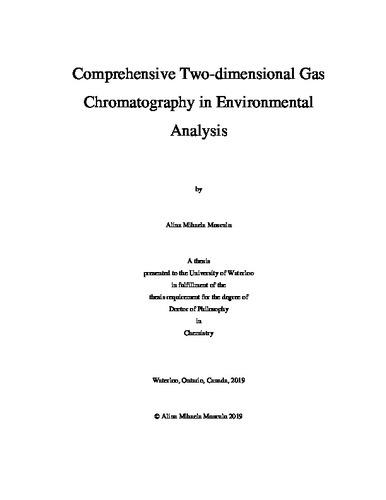 Comprehensive two-dimensional gas chromatography (GC×GC), a separation method offering greater peak capacity than conventional one-dimensional separations, has been rapidly growing in popularity. The GC×GC separation is performed by interfacing a modulator between two columns, where the modulator is referred to as the heart of the GC×GC system. It functions by periodically sampling, trapping and re-injecting the effluent from the first column into the second column. The most frequently used GC×GC systems require consumables such as liquid N2 for the trapping function of the modulator. Although these systems are very effective, their initial and running costs are a hindrance to more widespread use. A new, single-stage thermal modulator for GC×GC, that requires no consumables for operation has been developed to overcome these problems. In this work, the system was evaluated and compared to a routine accredited method for the analysis of polychlorinated biphenyls, organochlorine pesticides and chlorobenzenes was run using the new modulator and its performance was compared to that of an industry standard modulation system. Replicate analyses of these samples have been performed and within-day repeatability, between-day reproducibility, as well as between-trap reproducibility were assessed. The results are very encouraging as negligible shifts in retention times were observed for both within-day and day-to-day comparisons of the studied samples, and the quantitative results were comparable. Routine analysis and quality control applications will also benefit from improved retention time reproducibility. An overview of the device operation and the results from this study are summarized. With thousands of chemicals routinely used on a daily basis, the need for multiresidue methods to prioritize the monitoring of potentially persistent, bioaccumulating and toxic contaminants is increasing. GC×GC is known to be one of the most powerful techniques for the separation of complex environmental samples, especially for the analysis of compound groups that contain congeners or homologues like polychlorinated biphenyl congeners (PCBs). An analytical method was developed by using GC×GC coupled with micro-electron capture detector (µECD) to separate and quantify short chain chlorinated paraffins (SCCP) in sediment samples. Chlorinated paraffins (CPs) are complex mixtures of chlorinated n-alkanes with varying chain lengths (C10 to C30) and degree of chlorination (30 % to 70 % by weight). Distinct ordered bands were observed in the GC×GC chromatograms pointing to group separation. Using the Classification function of the ChromaTOF software, summary tables were generated to determine total area counts to set up multilevel-calibration curves for different technical mixes. Fortified sediment samples were analyzed by GC×GC-µECD with minimal extraction and cleanup. Recoveries ranged from 120 % to 130 %. To further validate the proposed method for the analysis of SCCPs, the laboratory participated in inter-laboratory studies for the analysis of standards and sediment samples. The results showed recoveries between 75 % to 95 % and z-score values < 2, demonstrating that the method is suitable for the analysis of SCCPs in soil/sediment samples. In a different study, hydroxylated polychlorinated biphenyls (OH-PCB) were discovered in water samples collected from storm sewers located in southwestern Ontario. Requiring minimal extraction and cleanup procedures, the samples were analyzed by GC×GC coupled with micro-electron capture detection. “Unknown” peaks observed in the two dimensional chromatograms were further investigated by GC×GC coupled with time-of-flight mass spectrometry (TOFMS) and tentatively identified as OH-PCBs. Mass spectral data and further derivatization confirmed the presence of dichloro- to pentachloro-mono-OH-PCBs. Hydroxylated PCB standards for different chlorination levels were multi-level calibrated using GC×GC-TOFMS and a semi-quantitative procedure was applied for each peak identified as OH-PCB in the samples. Preliminary results for the total di-, tri-, tetra- and pentachloro-hydroxylated PCBs showed higher levels for these compounds than any reported so far in environmental samples. Another analytical method was developed by using GC×GC-µECD and -TOFMS to identify and quantify polychlorinated diphenyl ethers (PCDEs) in sediment samples. Following up the tentative identification of PCDEs by GC×GC-µECD, GC×GC-TOFMS was further used for quantitative and semi-quantitative analysis. As a result, mono- to nonachlorinated diphenyl ethers were detected and quantified in sediment samples collected from Lake Ontario. The levels of PCDEs in the samples ranged from non-detects to 8000 ng/g. When positive results were reported, it was observed that mono- to tri-CDE had a higher contribution, greater than 30 %, towards the total PCDE amount. The findings convincingly demonstrate that using a technique such as GC×GC-µECD for the routine testing of environmental samples is an excellent screening approach for detecting non-targeted contaminants.