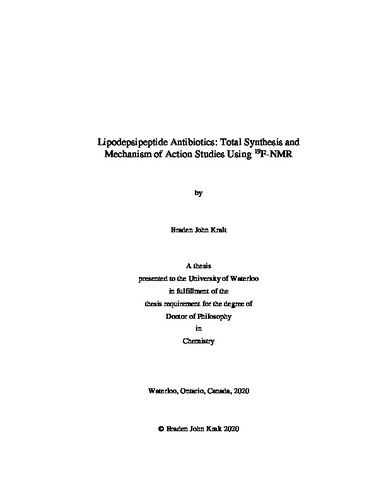 Daptomycin is a calcium-dependent cyclic lipodepsipeptide that is used clinically in the treatment of infections caused by pathogenic Gram-positive organisms, such as methicillin-resistant Staphylococcus aureus. Another calcium-dependent cyclic lipodepsipeptide antibiotic, A54145D, also has biological activity against Gram-positive pathogenic organisms, but is not used clinically because it is approximately 4-fold less active than daptomycin. Unlike daptomycin, however, A54145D is not inhibited by lung surfactant in vitro, which makes A54145D a suitable lead compound for the development of other antibiotics that may find use in medical practice as an alternative treatment for community-acquired pneumonia caused by Streptococcus pneumoniae. While the total synthesis of daptomycin has been reported, thus allowing for an efficient method for the generation of analogs of daptomycin, no similar synthesis for A54145D was reported at the start of these studies. To facilitate the development of future antibiotics, a total synthesis of A54145D was developed employing Fmoc-based solid-phase-peptide synthesis. This synthesis enabled us to confirm that the 3-hydroxyasparagine residue has the (2S,3S)-configuration (threo), and the 3-methoxyaspartate residue has the (2S,3R)-configuration (erythro) instead of the (2S,3S)-configuration (threo). Additional analogs of A54145D and A54145A¬1 were synthesized to study the structure-activity relationships of these antibiotics, and it was determined that the threonine residue is not amenable for substitution, in that replacement of threonine caused a dramatic loss in biological activity. Furthermore, it was confirmed that the replacement of the uncommon amino acid 3-methoxyaspartate with aspartate, and 3-hydroxyasparagine with asparagine resulted in a 16-fold reduction of biological activity. To further elucidate the mechanism of action of cyclic lipodepsipeptide antibiotics, which is a matter of some controversy in the scientific literature, ten fluorinated analogs of daptomycin were constructed by semi-synthesis or total synthesis to study their interaction with model membranes using 19F-NMR. These analogs exhibited activity against Bacillus subtilis equal to or approaching that of daptomycin. 19F-NMR studies with a peptide that contained a trifluoromethyl moiety at the end of the lipid tail indicate that at concentrations of daptomycin and calcium that are representative of in vivo conditions, daptomycin does not aggregate in solution. Preliminary 19F-NMR studies with a daptomycin analog containing the CF3 group appended to the ornithine residue at position 6 in the presence of model membranes and varying amounts of calcium suggest that the ornithine residue of daptomycin interacts with biological membranes before the lipid tail does.