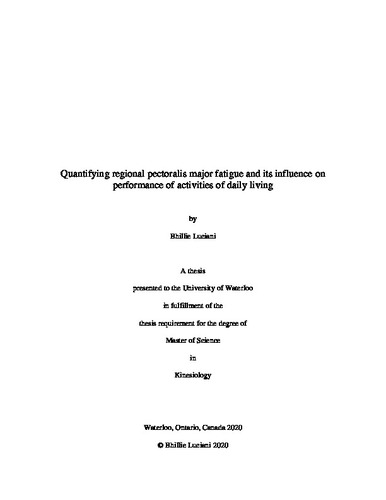 Extensive research reports on healthy shoulder function in the context of motion and muscular activity. However, less is known regarding how the shoulder complex and in particular its muscular components respond to disruptions, including musculoskeletal disorders, iatrogenic damage, or fatigue. The pectoralis major is a multipennate fan-shaped muscle, composed of three regions, and contributes to many upper extremity actions such as internal rotation, adduction, and horizontal adduction. Despite contentions that the pectoralis major may not be necessary for normal shoulder function, when damaged, shoulder function changes. The objective of this study was to examine differential fatigue in the pectoralis major as well as the effects of pectoralis major fatigue on shoulder muscle activation and shoulder kinematics in the context of daily activities. Twenty, young healthy male participants performed baseline activities of daily living, then performed a fatiguing protocol targeting the pectoralis major. Following the fatigue protocol, participants performed the same activities of daily living at 0, 1, 3, 7, and 15-minutes post-fatigue. Electromyography (EMG) was collected from the three regions of the pectoralis major and surrounding shoulder musculature of the dominant upper extremity were collected to assess muscle contributions to the activities of daily living (mean EMG). Kinematics of the dominant upper extremity were also collected to identify changes to joint angle range of motion changes (torso, thoracohumeral, and elbow). Fatigue was quantified in the three regions of the pectoralis major in order to determine differential fatigue. Fatigue, EMG, and kinematic data from post-fatigue time points were compared to pre-fatigue. All participants experienced fatigue in the pectoralis major as a result of the fatiguing protocol. More specifically, differential fatigue occurred between regions of the pectoralis major, with participants fatiguing in one, two, or all three regions. Further, changes in kinematics and muscle activity during the activities of daily living occurred, indicating changes in muscle activation patterns and joint angle ranges of motion due to fatigue. Joint angle ranges of motion changed (~6˚) as a result of the fatigue protocol, while there were small changes (less than 2% maximum voluntary contraction) in muscle activity. Overall, this thesis suggests that the pectoralis major muscle is complex and focused investigation of its regional contributions is necessary to understand how the muscle variously contributes to shoulder function. These initial findings can inform future research on the pectoralis major while informing on the utility of fatigue as a muscle knock-out or knock-down model.