Assessing Stratigraphic Controls on the Secondary Detrital Footprint from Buried Mineralization and Alteration at the Highland Valley Copper Mine, British Columbia 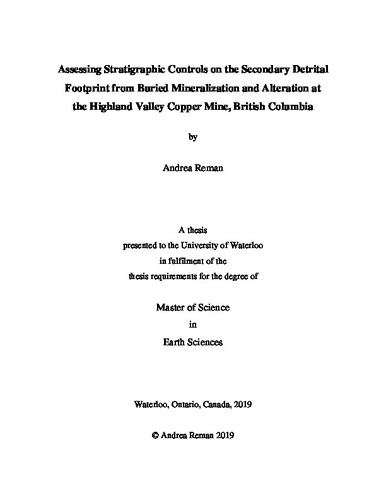 Mineral exploration is progressively shifting to deeper targets, including those buried under thick unconsolidated sediments. It is thus becoming increasingly important to understand the sedimentary successions of the shallow subsurface (0-200m) in order to enhance exploration strategies to locate and characterize buried targets. One strategy is to investigate the sedimentary sequence overlying known mineralized and altered zones. As such, this study aims to characterize stratified unconsolidated sediments overlying mineralized as well as altered zones at the Highland Valley porphyry copper system (HVC), in south-central British Columbia, and investigate their effects on dispersion patterns of indicator minerals and geochemical pathfinders. Stratigraphic logging and sedimentary facies analysis of ten drillcores have produced a new stratigraphic framework of the unconsolidated sediment cover and a refined depositional environment interpretation. Four geological cross-sections and an interpreted seismic profile improve our understanding of the stratigraphic architecture of the valley fill sediments in the vicinity of the Highland Valley Pit, as well as across the J.A. target, located four km to the east. Two new, previously unreported units are described from this study: a deeper, older till unit as well as a deglacial sequence overlying the older till unit. This study also reveals important lateral stratigraphic and sedimentary facies changes over relatively short distances. Two major ice advance and retreat cycles, the 1st one being older than 50 ka, and additional minor oscillations of ice margins during the last deglaciation of the area, are recognized in the stratigraphic record. Petrophysical (density, porosity, magnetic susceptibility, resistivity, and chargeability) and sedimentological (grain size) property measurements are presented for the major cover units, which can help better resolve the geophysical footprint of buried targets. Stratigraphic units interpreted to have formed by meltwater related processes and deposited in ice-marginal or proglacial settings generally have a higher proportion of locally-derived lithologies relative to other units, while tills have a more dominantly distal signature. Several porphyry copper indicator minerals, such as pyrite, chalcopyrite, and jarosite, are found in each of the Quaternary sediment cover sub-units analyzed. The strongest overall footprint of mineralization is found in two deep, poorly-sorted outwash and two deeper subglacial tills. They contain variably abundant indicator minerals (e.g. pyrite, chalcopyrite, Mn-epidote, chromite) and elements (Cu, Mo, W, As) that are indicative of porphyry copper mineralization. The source of most of these indicators is predominantly the Guichon Creek batholith that hosts the mineralization, but some indicators may be derived from distal volcanic rocks and volcanogenic sediments outside of the batholith. Coarse grain size and felsic lithology distinguished Guichon Creek batholith material from the others. Hyperspectral techniques were applied to determine the abundance of prehnite (distal alteration footprint) and kaolinite (proximal alteration footprint) in large (>2 mm) clasts. Overall, results are consistent with the abundance of clasts sourced from Guichon Creek batholith (lower prehnite content and higher kaolinite content = higher GCB clast abundance). This finding suggests the technique may be used to get insights into the proximity of the source of clasts relative to buried HVC-type mineralization. Subsurface till units also appear to have higher abundances of several indicator minerals (e.g. pyrite, chalcopyrite, jarosite) and geochemical pathfinders of mineralization (e.g. Cu, Mo, W, As) and alteration (e.g. Mg, Te, Bi) compared to previously published surficial till data. Oxidation of the surficial till and water-mineral interactions in the deeper (water-saturated) tills may explain some of the observed differences (esp. for mobile elements); however, re-entrainment of pre-existing sediments is another important mechanism to consider. The strongest footprint signal occurs in the deepest tills. Mineralized and altered bedrock thus appears to have been more accessible to glacial erosion during the older glacial phases due to less preserved sedimentary cover in depressions. Indirect sources (sediment re-entrainment) may have contributed to the footprint signal in the surficial till, perhaps more than shallow mineralized sources in some places. Overall, this study provides several refinements to the stratigraphic framework of the sedimentary cover at HVC, as well as new insights into the occurrence and abundance of HVC-related indicator minerals and pathfinders in these units. One important implication of this study is that dilution up the stratigraphy is clear but limited at HVC; however, it could be greater in other prospective thick drift areas; stronger dilution in surficial units is possible, which could mask a clear subsurface footprint and buried sources of importance.