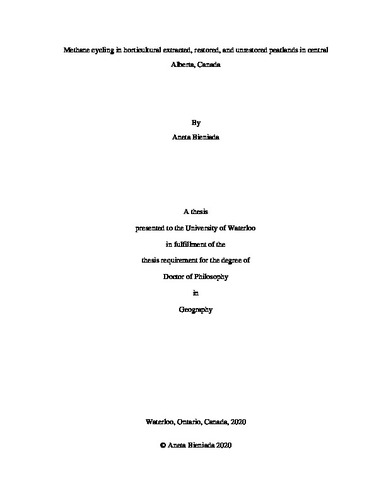 Horticulture peat extraction drastically changes peatland ecosystems and their carbon and greenhouse gas balance. Comprehensive study on the combined response of methane (CH4) cycling (i.e., CH4 production, oxidation, subsurface storage and release) to peat extraction, abandonment and restoration is lacking. It is still unknown how much CH4 is released through abrupt episodic ebullition events and whether they occur at unrestored sites, and how the subsurface free-phase gas, potentially comprised up to 50 % of CH4, recovers post-extraction. To date, there are no studies on ebullition and free-phase gas development with the age of restoration. There are few studies focused on methanogenic and methanotrophic members of the microbial community, its structure, abundance, and activity in these sites. Here, I address these research gaps to better understand the role of peatland restoration in greenhouse gas balance recovery and to support informed decision making on peatland management. My objectives were to determine ebullition contribution to CH4 emission from currently extracted and unrestored sites and from sites restored at different times in the past; to quantify the subsurface free-phase gas content and dissolved CH4 concentration to determine if there is a progression in subsurface CH4 pool recovery at both restored and unrestored sites; and to identify the CH4-cycling microorganisms, their community structure, abundance, diversity, and the potential rates of CH4 production and oxidation. The outcome of the research is discussed in the context of peat physicochemical properties. The study site was located west of Edmonton, Alberta (53° 33' N, 114° 44' W) at a horticulture extraction peatland complex managed by Sun Gro Horticulture and comprised of several sites of different management stages from current extraction (the Active site), through Unrestored, to restored at different times in the past: in 1991, 2009, and 2012 (RES-1991, RES-2009, and RES-2012, respectively). A natural bog (Natural) within the complex served as a reference site. The community composition and abundance of methanogens and methanotrophs was determined with Illumina Tag 16S rRNA gene sequencing and linked to physicochemical conditions across the sites and the dominant type of peat surface cover. Potential CH4 production and oxidation rates (MP and MO, respectively) were determined in microcosms with peat collected above and below the water table at the Natural, Unrestored and RES-2009 sites. I observed more diverse and abundant CH4-cycling communities in the oldest and the youngest restored sites (RES-1991 and RES-2009), while RES-2012 showed similar microbial characteristics to that in the Unrestored and Natural sites and generally low MP and MO likely affected by peat chemistry. In conclusion, restoration promotes development of CH4-cycling microorganisms more abundant and diverse than in the Natural site, while lack of restoration leads to poorly developed community of methanogens and methanotrophs and low potential MP and MO rates. I also measured pore water CH4 concentrations in summer 2017 and steady and ebullitive CH4 fluxes from all study sites across two growing seasons using a closed chamber method with a portable greenhouse gas analyzer. Fluxes and dissolved CH4 were evaluated in relation to the dominant type of surface cover, and other potential controls. Ebullition occurred only at RES-1991 and RES-2012, where the highest steady fluxes were measured, but no ebullition and low fluxes were found at RES-2009, despite similar wetness and dominance of graminoids. Both steady and ebullitive emissions were related to the water table, soil temperature, and gross ecosystem production, but only steady fluxes depended on the cover of vascular plants. The magnitude of ebullition was positively correlated with pore water CH4 concentration and the magnitude of the steady flux. The concentration of dissolved CH4 recovered to the natural level in restored sites but remained low and did not increase over the season in the Unrestored site. Flooded, sedge-dominated restored sites can emit more CH4 than natural bogs, including ebullition, but steady fluxes contribute > 90 % of total CH4 emission. Free-phase gas content was measured with soil moisture content probes and ground penetrating radar (GPR). It did not follow the CH4 emission pattern, but large amounts, close to that at the Natural site, were found in the Unrestored and RES-2009 (sites with low CH4 emission and production rates), likely due to peat structure that promotes gas accumulation. This was also observed in the Active site. Methane emission across the sites generally followed the pattern of the abundance and diversity of CH4-cycling microbes, with flooded, sedge-dominated restored sites showing the highest values and Unrestored and Active sites the lowest. Local environmental conditions appear to have more impact on these aspects of CH4 cycling in restored peatlands than the age of restoration. Methane fluxes cannot predict free-phase gas content, which was observed to be independent of restoration, and can be high if peat is compacted.