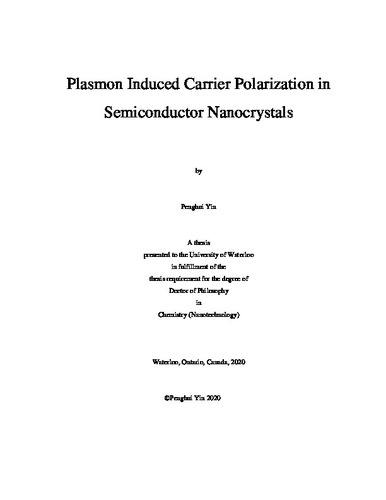 Currently used technologies are reaching the natural performance limit, invigorating the development of different quantum technologies. Spintronics and valleytronics are emerging quantum electronic technologies that rely on using electron spin and multiple extrema of the band structure (valleys), respectively, as additional degrees of freedom. There are also collective properties of electrons in semiconductor nanostructures that potentially could be exploited in multifunctional quantum devices. Specifically, plasmonic semiconductor nanocrystals (NCs) offer an opportunity for interface-free coupling between a plasmon and an exciton. However, plasmon–exciton coupling in single-phase semiconductor NCs remains challenging because confined plasmon oscillations are generally not resonant with excitonic transitions. In this thesis, using magnetic circular dichroism (MCD) spectroscopy, I examined the electron polarization in plasmonic semiconductor NCs, and the effect of electron localization, plasmon oscillator strength and damping, as well as NC morphology on carrier polarization. The results effectively open up the field of plasmontronics, which involves the phenomena that arise from intrinsic plasmon–exciton and plasmon–spin interactions. Furthermore, the dynamic control of carrier polarization allows us to harness the magnetoplasmonic mode as a new degree of freedom in practical photonic, optoelectronic and quantum-information processing devices. First, we demonstrated the control of excitonic splitting in In2O3 NCs upon excitation with circularly polarized light in an external magnetic field by simultaneous control of the electronic structure of donor defects and the nanocrystal host lattice. Using variable-temperature− variable-field MCD spectroscopy, we show that the NC band splitting has two distinct contributions in plasmonic In2O3 NCs. Temperature-independent splitting arises from the cyclotron magnetoplasmonic modes, which impart angular momentum to the conduction band excited states near the Fermi level, and increases with the intensity of the corresponding plasmon resonance. Temperature-dependent splitting is associated with the localized electron spins trapped in defect states. The ratio of the two components can be controlled by the formation of oxygen vacancies or introduction of aliovalent dopants. Using these experimental results in conjunction with the density functional theory modeling, relative contribution of the two mechanisms is discussed in the context of the perturbation theory taking into account energy separation between the NC excited states and the localized defect states. To implement such opportunities it is essential to develop robust understanding of the parameters that influence magnetoplasmon-induced carrier polarization. I investigated comparatively the plasmonic properties of Mo-doped In2O3 (IMO) and W-doped In2O3 (IWO) NCs, with a particular emphasis on the role of plasmonic properties on excitonic splitting. In contrast to tungsten dopants, which are predominantly in 6+ oxidation state, molybdenum coexists as Mo5+ and Mo6+, resulting in a lower dopant activation in IMO compared to IWO NCs. By manipulating the plasmonic properties of these two NC systems, such as localized surface plasmon resonance energy, intensity, and damping, we identified two opposing influences determining the excitonic Zeeman splitting induced by magnetoplasmonic modes. Localized surface plasmon resonance oscillator strength, commensurate with free carrier density, increases while electron damping, caused by ionized impurity scattering, decreases the transfer of the angular momentum from the magnetoplasmonic modes to the conduction band electronic states. The results contribute to fundamental understanding of the mechanism of non-resonant plasmon-exciton coupling and magnetoplasmon-induced Zeeman splitting in degenerate semiconductor NCs, allowing for the rational design of multifunctional materials with correlated plasmon and charge degrees of freedom. The magnetoplasmon-induced carrier polarization was further attested in oxygen-deficient TiO2 NCs of which the excitonic MCD band has an opposite sign compared to that observed for plasmonic In2O3 NCs indicating the plasmon-induced carrier polarization can be controlled by the electronic properties of NC host lattice. In addition, further manipulation of excitonic splitting in colloidal TiO2 NCs was demonstrated by simple control of their faceting. By changing NC morphology via reaction conditions, I controlled the concentration and location of oxygen vacancies, which can generate localized surface plasmon resonance and foster the reduction of lattice cations leading to the emergence of individual or exchange-coupled Ti(III) centers with high net-spin states. These species can all couple with the nanocrystal lattice under different conditions resulting in distinctly patterned excitonic Zeeman splitting and selective control of conduction band states in an external magnetic field. These results demonstrate that the combination of redox-active vacancy sites and nanocrystal morphology can be used to control quantum states in individual NCs using both localized and collective electronic properties, representing a new approach to complex multifunctionality in reduced dimensions. The results of this work demonstrate the ability to control carrier polarization in nonmagnetic metal oxide NCs using both individual and collective electronic properties, and allow for their application as an emerging class of multifunctional materials with strongly interacting degrees of freedom.