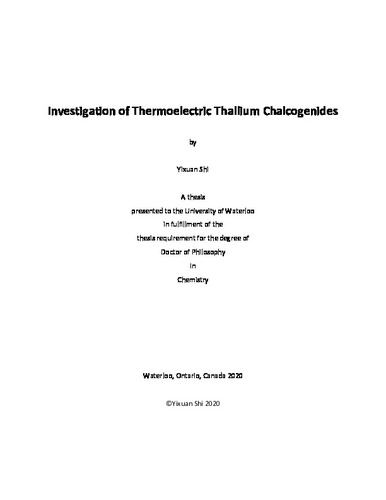 Thermoelectric materials have drawn extensive attention because of their potential to provide assistance in reducing the usage of fossil fuel sources and the greenhouse effect. Throughout this thesis, the purpose was to investigate the thermoelectric properties of previously reported thallium tellurides. Tl2Ag12Te7+δ, TlSbTe2, and Tl4Ag18Te11 were selected as candidates for this investigation due to their interesting crystal structures. By substituting the Te element in Tl2Ag12Te7+δ, with Se we found a new phase of Tl-Ag-Se system which crystallizes in a commensurate superstructure and possesses ultralow thermal conductivity. These four parent compounds have low thermal conductivity owing to the high molar mass and complex crystal structures. In Chapter 1, thermoelectric background knowledge was introduced. Generally, complex crystal structures such as incommensurate superstructures can reduce the lattice thermal conductivity, which is beneficial for increasing the thermoelectric figure of merit. The minimum lattice thermal conductivity can be estimated by three different models: Clarke model, Cahill model, and Diffuson model. Finally, a brief review of the state-of-the-art chalcogenide thermoelectrics was presented. In Chapter 2, the experimental procedures related to all the projects were described. Powder X-ray diffraction, single crystal X-ray diffraction, and energy depressive X-ray analysis were utilized to obtain the compositional and structural information of the synthesized materials. Electronic structures of the materials were determined by performing first principle density functional theory calculations. Then the physical properties including melting point, Seebeck coefficient, electrical conductivity, and thermal conductivity were determined. In Chapter 3, a new selenide, Tl2Ag12Se7, is reported. Unlike Tl2Ag12Te7+δ, Tl2Ag12Se7 crystallizes in a commensurate superstructure with a √3 × √3 × 1 super cell of the Zr2Fe12P7 structure type. Initial investigations into the thermoelectric properties of this selenide suggested that it was a p-type semiconductor at room temperature that underwent a pnp phase transition at 410 K. Further investigations via XPS indicated that the electronic states of all atoms did not undergo significant variations before and after the phase transition temperature. The reanalysis of the raw data obtained from the ZEM-3 instrument and the low temperature Seebeck measurements implemented by the PPMS also confirmed that Tl2Ag12Se7 remains a p-type semiconductor throughout all temperatures investigated. In Chapter 4, Tl2Ag12Te7+δ was originally reported by Moreau et al. to crystallize in the hexagonal space group P6.1 The unrealistically short Te-Te bond distances in the reported crystal structure (2.4 Å) led us to investigate the crystal structure further. We determined that Tl2Ag12Te7+δ is actually an incommensurate composite crystal structure composed of a linear Te atom chain along the c axis surrounded by a Tl2Ag12Te6 framework. The super-space group of the Te atom chain is P6(00γ)s and the super-space group of the Tl2Ag12Te6 framework is P63(00γ)s. The complex crystal structure resulted in an extremely low thermal conductivity of 0.25 W m–1 K–1 and a zT of 1.1 at 525 K. This is the largest thermoelectric figure of merit observed in an incommensurate crystal structure to date. In Chapter 5, the TlSbTe2 crystal structure shares similarities with the crystal structure of the state of the art thermoelectric material Bi2Te3. Both have a layered crystal structure; this layered structure in Bi2Te3 leads to anisotropic electronic properties depending along which crystallographic axis the properties are measured. TlSbTe2 has significantly more covalent interactions between the telluride layers diminishing the anisotropic effects. The best thermoelectric performance of In-doped TlSbTe2 was achieved at 625 K, with a figure of merit (zT) of 0.77. The overall best zT was improved to 0.85 at 620 K with the sample of nominal composition Tl0.98SbYb0.02Te2. In Chapter 6, Tl4Ag18Te11 was claimed to crystallize in a cubic structure with disordered Tl atoms filling cuboctahedral voids. The electronic structure calculations of Tl4Ag18Te11 predicted it to be a semimetal with the valence and conduction bands touching at the Γ point in the Brillouin zone, based on an I4mm space group model with ordered Tl atom sites. The studies of the thermoelectric properties of hot-pressed Tl4Ag18Te11 and its nonstoichiometric homologs, illustrated an unusual n-type extrinsic semiconducting behavior, combined with an extremely low thermal conductivity. The thermal conductivity of a sample of the nominal composition “Tl4.05Ag18Te11” reached 0.19 W m−1 K−1 at 500 K, with this value being one of the lowest achieved by crystalline materials to date. This can be attributed to the highly disordered Tl atoms and the large unit cell with its highly complex structure, in accord with the low Debye temperature of 98 K.