Bioinformatic insights into the diversity and evolution of bacterial toxins 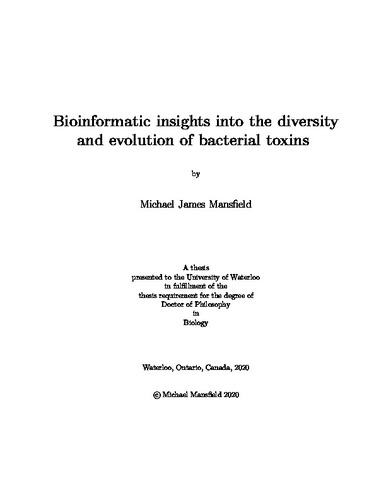 Bacterial toxins are a broad category of molecules ranging from small organic compounds and peptides to large multi-domain or multi-meric enzymes. Several important diseases are caused primarily by bacterial toxins including botulism and diphtheria. Paradoxically, the same toxins have proven useful for the treatment of muscular disorders and cancer, respectively. Given their importance in medicine and their utility as drugs, it is desirable to attain a greater functional and mechanistic understanding of toxin families. However, a full description of any sequence's functionality must incorporate an understanding of the evolutionary processes that produced them, and currently little is known about these forces. Using a bioinformatic approach, this thesis presents analyses of three bacterial toxin families: clostridial neurotoxins, which cause botulism and tetanus; diphtheria toxins, which cause diphtheria; and large clostridial toxins, which contribute to the infections produced by various clostridia, including \textit{Clostridioides difficile}. The detection of toxin-related sequences from bacterial genomes allows the discovery of toxin variants that may have gone undetected by other methods of toxin identification. Based on the available genomic data, toxin families that cause disease in humans appear to be broader than previously imagined. Toxin-related sequences are capable of performing unique functions compared to the toxin variants more traditionally associated with human disease. By examining human toxins in evolutionary terms, it is possible to identify the functional innovations that have occurred to result in human specificity, as well as delve more deeply into the relationships between toxin sequences and their functions. Thus, the studies presented here provide examples of how the field of toxin biology, like many other disciplines, has much to gain from the genomic revolution.