Co-Modality: Opportunities and Barriers in the Greater Toronto Area 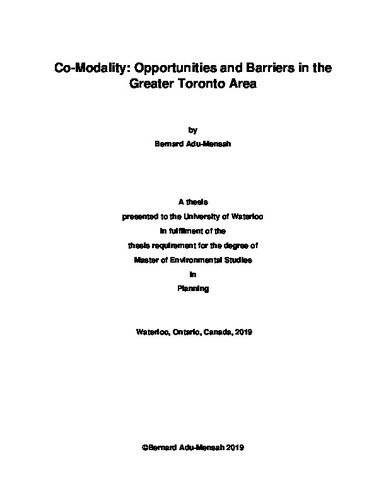 The Greater Toronto Area is said to be one of the fastest growing regions in Ontario experiencing many challenges due to the influx of population and the demand for goods and services. Amongst the challenges include externalities associated with the last mile delivery of goods such as traffic congestion, emissions of Green House Gases, and illegal parking of delivery vehicles posing as threats to active transportation. The purpose of this study was to identify opportunities for combining both passengers and freight (parcels) in the same vehicle at the same time (co-modality) and barriers that might hinder such a practice in the city of Toronto. The study also sought to identify current co-modal practices in the Greater Toronto Area. The methodology employed for the research was the exploratory research design using semi-structured interview guides to collect valuable information from stakeholders in the city of Toronto through telephone interviews and face-face interviews. Again, information was obtained through literature review. The information collected from the interview process were analysed using the thematic framework analysis. Findings from both the literature review and the collection of information from stakeholders revealed that there are indeed both environmental and economic benefits of co-modality. Shipper Bee and A-Way Express are two companies that practice co-modality in the Greater Toronto Area. Opportunities which exist in the city for co-modality included the willingness of the city officials to pilot new programs to reduce congestion, the growth of e-commerce in the city allowing businesses in the freight industry to adopt new business models, and the availability of public transit which can be utilized to move freight during off-peak periods. Barriers identified included a by-law which prevents the taxi industry from engaging in such a practice, conflicts with passenger schedules, the risk of high insurance rate premiums, and safety concerns. Based on the findings of the study, there is, indeed a promise for co-modality in the city of Toronto. It is recommended that stakeholders must co-operate to the successful implementation of co-modality. Another recommendation is that the Municipal Licensing and Standard of the city of Toronto should review the by-law which prohibits co-modality in the taxi industry, taking a critical look at the business operation of Shipper Bee company. Finally, the safety of passengers must be ensured through the scanning of parcels to reduce the safety and security risks involved in the movement of both passengers and freight.