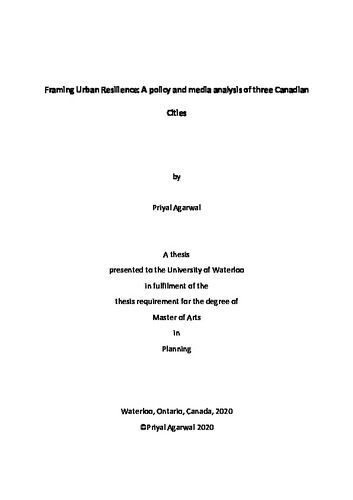 Urban Resilience, generally understood as the capability to withstand, prepare, and recover from shocks and stresses (100RC, n.d.-b), has risen in popularity as a means of dealing with change and uncertainty in cities. Indeed, a US-based Philanthropic organization, the Rockefeller Foundation, ran a program called 100 Resilient Cities from 2013 - 2019, spending an estimated 167 million USD on this global endeavour. Four cities in Canada participated in the program: Toronto, Vancouver, Montreal and Calgary. Yet, despite the rising popularity of the concept, urban resilience remains difficult to define, implement, and monitor, with multiple definitions and interpretations in the academic literature. Moreover, despite its recent rise in popularity in planning practice, few studies explore how urban resilience is framed by cities and citizens. Understanding how resilience is understood ‘on-the-ground’ is critical, as more and more cities integrate this contested concept into planning practice. This thesis is an empirical exploration of how resilience is framed in three Canadian cities: Toronto, Vancouver, and Calgary. Given that all three cities participated in the Rockefeller Foundation’s 100RC program, I hypothesize that they would frame resilience in much the same way. Using content analysis, I examined City Council minutes (n= 135) and national and local newspaper articles (n= 484) in three cities from 2013-2018. I compare resilience narratives across cities, as well as assesses the congruence between local government and media with respect to how they frame resilience. My findings show varied framings of urban resilience across the three cities. My findings also reveal a lack of congruence between local government and media. Further, the study validates the claims by some academic scholars that resilience works as a “boundary object” (Brand & Jax, 2007; Star & Griesemer, 1989), but I argue that for appropriate planning and policy within cities, resilience needs to be more descriptive in terms of who/what is at risk.