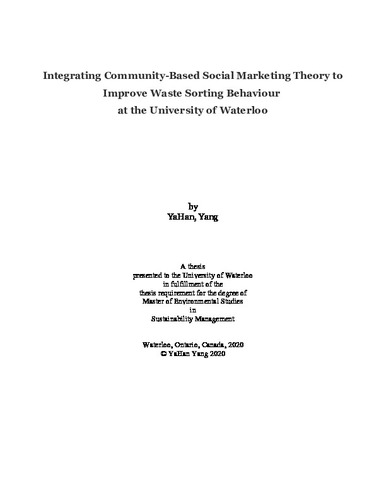 Improving waste sorting has become an urgent matter in the global North since 2017 when China, the world’s largest waste importer, announced that it would no longer accept highly contaminated waste. Consequently, new strategies for dealing with waste have been proposed in both the private and public sectors. In 2018, the University of Waterloo (UW) introduced new waste sorting receptacles on campus to facilitate waste sorting, as part of its larger goal to become a zero waste campus by 2035. Despite rolling out these new waste stations, UW’s annual waste audit still showed high cross-contamination and low waste diversion rates. Further complexity was added when a new sorting standard was released in 2019 to comply with UW’s new waste management system. This new sorting standard presented an important opportunity to provide consistent and effective guidance for the campus community through the lens of Community-Based Social Marketing (CBSM). A number of past studies that examined changes in waste sorting behaviour merely focused on the signage, and considered only the numeric data changes, but neglected the connection with their users. By integrating the CBSM framework, this study was able to understand users’ barriers and current behaviours before going straight into signage design. Moreover, the adoption of a comprehensive research design enabled the researcher to assess the waste sorting situation on the UW campus from different aspects. The purpose of this study was to improve correct waste sorting behaviour on the UW campus by leveraging the impact of altering signage at the new waste stations. Experimental signage options that were more user-friendly, straightforward, and less confusing were created and tested for effectiveness. This mixed-method study included three phases, and follows the CBSM framework to test waste signage designs on the UW campus. The pre-phase included a survey, observations, and a waste audit, which helped develop an understanding of the target audience (i.e. the campus community) and identified the barriers and benefits in relation to waste sorting on campus. Subsequently, experimental waste signs were then designed and installed at selected sites, based on the results synthesized from the pre-phase. Lastly, the post-phase was conducted for follow-up purposes to explore users’ interactions with the redesigned signs, and waste sorting outcomes. Improvement of diversion rates and sorting attempts were noted at sites installed with experimental signs. Positive interactions between the experimental signs and the users were also observed in the post-phase. Moreover, it was found that not only the visual design of the signage matters, but also the visual attraction and the overall visual experience provided by the installation surroundings can influence a user’s sorting behaviour. Following the CBSM framework during the waste sign design process provided a strong connection between the signs’ design and the users’ experiences. In addition, altering the visual design of waste signage can be influential, but the effect is limited unless the users notice the change. Misconceptions and past experiences are two main reasons believed to heavily affect users’ sign reading and waste sorting habits. Since signage is unlikely to significantly improve correct waste sorting behaviour alone, other interventions are needed to address this issue.