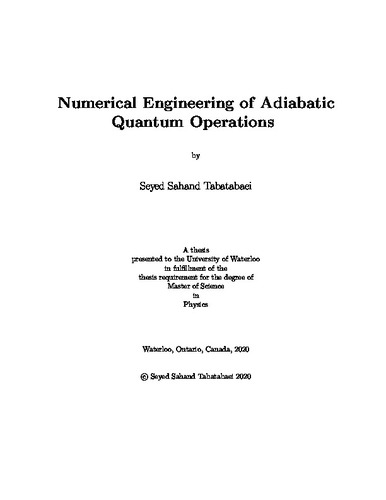 Adiabatic quantum operations are ubiquitous in fields such as quantum information processing, quantum control, and magnetic resonance, where their high fidelity and general robustness renders them an essential tool for various applications. This inherent robustness due to adiabaticity can, however, be impaired in cases where the experimental conditions strictly require very fast evolution times. In this thesis, we provide a gradient-based numerical optimization protocol for efficiently engineering adiabatic operations, allowing for the systematic inclusion of robustness criteria against various experimental non-idealities, including inhomogeneities and uncertainties in system parameters, as well as perturbations in the Hamiltonian such as spin-spin interactions. The protocol is implemented in the context of adiabatic passages for magnetic resonance, and it is shown that in addition to conventional adiabatic pulses, it can also generate exceptionally fast operations that although slightly deviate from adiabaticity in limited instances, still lead to a high fidelity. The effectiveness of our method for addressing perturbations is also demonstrated by designing a fast adiabatic passage for dipolar-coupled electrons, and numerically comparing its performance with a pulse without such considerations.