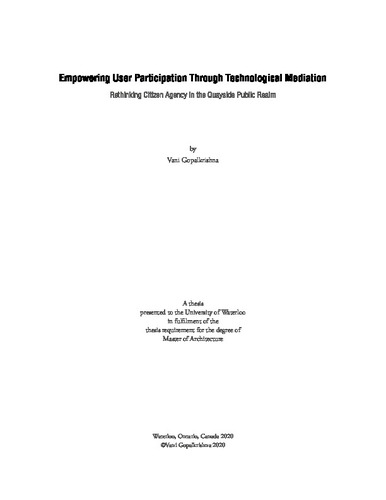 The idea of public space has moved from a critique to an orthodoxy, embraced by most stakeholders as an important part of urban development. In the last few decades there is an increase in a particular landscape of projects, that engages with a set of urban tools coupled with digital and information technology that expands, augments and alters the public and social interactions in the urban space. As a result of which, information and matter, code and space collapse into a new system, and mediated spaces have become an architectural problem. Expanding on this line of inquiry, the thesis looks at the role of urban tools devised as a set of assemblage rather than objects or installations, as more relevant to the experience of the public realm. They function independently or collectively and through mediated technologies foster relationships between the urban environment and the user, by empowering them to participate in the constant shaping of it. Contrary to the current trends in techno-centric visions for smart city proposals, the research sheds light on other participatory forms of smart city initiatives that makes optimal use of ICT and digital technologies to produce collective urban experiences. In doing so, the research critiques the participatory visions promised in the Sidewalk Labs owned Quayside project in Toronto, based on the analysis of a 1960s historic precedence, by Cedric Price. And then traces its contemporary relevance by re-interpreting the key concepts of agency and participation into the Quayside fabric in a more decentralized setting to intensify the project’s empowering visions. To strengthen the argument, the research builds a theoretical framework of three fundamental concepts involving public realm, user participation and technological mediation that provides two productive viewpoints for the design explorations. The first one is a critical lens to evaluate the design of high agency participatory systems. The second one theorizes philosophies of technology that provides insights to the design of interactive architectural assemblies. As technologies become more pervasive, they question the role of the material city in fostering new modes of interactions between the citizens and the public space to represent a collective experience. The intent of the technologically mediated design interventions is to promote participatory conditions that opens up possibilities to render varied social settings relevant to the cultural context of the contemporary society, which otherwise would be impossible.