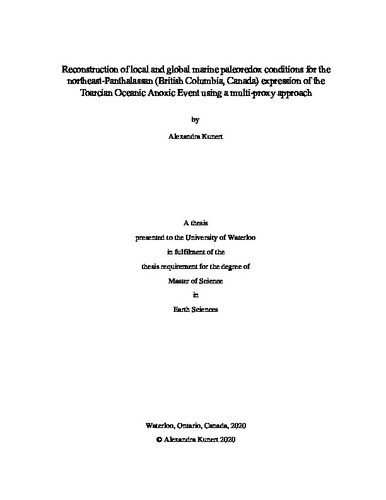 The Toarcian Oceanic Anoxic Event (T-OAE) of the Early Jurassic is one of several Mesozoic instances of expanded ocean anoxia, coupled with feedbacks and perturbations in Earth’s systems. The drivers for these feedbacks are debated, but the general consensus is that the event is initially rooted in the emplacement of the Karoo–Ferrar large igneous province. The T-OAE is also linked to a second-order mass extinction in the marine and terrestrial realms. Study of the T-OAE aims to provide insight into the causes and consequences of the environmental changes, which may be applicable at present given that some of the characteristics of the T-OAE (e.g. carbon inputs leading to global warming) are reflected in the modern environment. The purpose of this study, which focused on an Early Jurassic section containing the T-OAE in northeastern British Columbia, was to provide extensive insight into the local depositional environment, as well as a glimpse at the global ocean paleoredox conditions across the duration of the event. In northeastern British Columbia, the Early Jurassic is divided into the Gordondale Member and Poker Chip Shale of the lower Fernie Formation. The studied drill core contains both members; the Gordondale is the basal member composed of organic-rich, calcareous mudstone, whereas the overlying Poker Chip shale is a siliceous mudstone to siltstone unit. To provide context for the T-OAE in the study core, organic carbon isotope compositions were profiled in search of a telltale negative carbon isotope excursion (N-CIE) which signals the event zenith. The event was identified by an N-CIE in the uppermost 7 meters of the Gordondale Member below the contact with the Poker Chip Shale. Local paleoenvironmental reconstruction was accomplished using elemental redox sensitive trace metal geochemistry to determine the redox regimes (oxic, suboxic, anoxic or euxinic) and hydrography (open versus restricted) of the depositional basin. The Gordondale Member was characterised as anoxic to euxinic. Elevated Mo and V (up to 370 µg/g and 2757 µg/g, respectively) suggested some intervals were deposited in an euxinic environment. The U and Re concentrations are also elevated in the euxinic intervals (up to 36 µg/g and 878 ng/g, respectively). Intervals with lower Mo and V concentrations (< 53 µg/g and < 289 µg/g, respectively) but elevated U and Re content (up to 33 µg/g and 287 ng/g, respectively) indicated anoxic (non-sulfidic) conditions. The Poker Chip Shale was characterised by suboxic conditions (moderate Mo, V, U, and Re concentrations; < 21 µg/g, < 248 µg/g, < 6.3 µg/g, 86 ng/g, respectively). The cored interval was characterised as having been deposited in an open marine upwelling zone environment. This interpretation is based on an Mo–U covariation trend similar to the modern North and South American Pacific coastal basins (e.g. California, Mexico, Peru), and a Cd–Mo covariation trend indicating substantial primary productivity as a result of upwelling nutrient-rich deep waters. The T-OAE was a period where seafloor anoxia and/or euxinia is thought to have expanded across the global oceans. An estimate of the global area of seafloor anoxia and euxinia can be obtained from recently-developed mass balance models for elemental Re and Mo. Samples deemed anoxic (enrichment factors of U > 3.6 and Re > 100) or euxinic (anoxic, and enrichment factor of V > 3, S/Fe > 1.15) were grouped stratigraphically by those which occurred before the N-CIE (“Pre-N-CIE”), and during the N-CIE (two groups, “lower N-CIE” and “upper N-CIE”). The results of the mass balance model illustrated an expansion of anoxic and euxinic seafloor areas at the onset of the N-CIE (Pre-N-CIE to lower N-CIE) from ~1% to 6% of the total seafloor area. This was followed by a contraction of the anoxic and euxinic seafloor areas from ~6% to 4% of the total seafloor area from the lower to upper portion of the N-CIE. An attempt to link the expansion of anoxic and euxinic seafloor areas to Karoo–Ferrar large igneous province activity was made using a sedimentary Hg proxy. Previous study indicated that the utility of the proxy may decrease with increasingly distal (deeper waters, farther offshore) marine deposition. No distinctive Hg signature was associated with the N-CIE in the study core. As the study core was interpreted as having been deposited in a deep water/offshore environment, the lack of a Hg signal for volcanic activity was possibly affected by distal deposition. Thus, no conclusions were drawn from sedimentary evidence of enhanced volcanic activity. While no direct link to the Karoo–Ferrar province was made within the core, the mass balance models suggest that the T-OAE was indeed a period of expanded anoxic/euxinic seafloor area, at least in part. The maximum 6% total seafloor area covered by anoxia/euxinia was most likely located along the continental margins, thus the deep waters of the abyssal plains and central ocean likely remained oxygenated. These findings have demonstrated that the T-OAE was a minor event relative to the well-known “Big 5” mass extinctions, yet it was still associated with biodiversity loss. By monitoring modern anoxic/euxinic seafloor area, it may become possible to track the changes in Earth’s systems through comparison with these ancient OAE events.