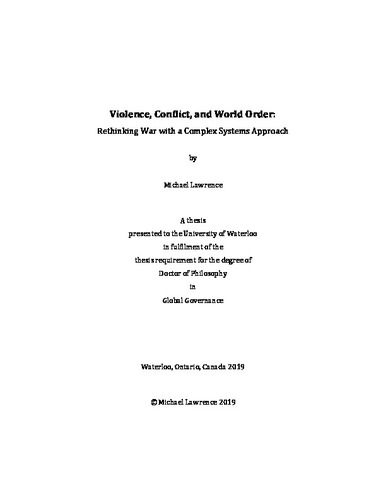 This thesis employs a complex systems approach to argue that the nature of violent conflict coevolves with broader features of world order. The first chapter demonstrates that International Relations and Comparative Politics – the predominant fields in the study of violent conflict – are insufficiently systemic to elucidate recent events. International Relations theories do not endogenize the formation of actors, struggle with systemic change, and remain unproductively fixated on anarchy. Comparative Politics focuses inordinately on ‘domestic’ causes of violent conflict and retains the baggage of modernization thinking. At the same time, the very concept of ‘war’ unproductively narrows the study of violent conflict. After identifying several key ‘macrotrends’ in warfare, the chapter proposes conceptual distinctions between violence, conflict, and order to better understand long-term variations. Chapter Two develops an ontology of world order based in complex systems thinking. After defining world order and exploring the nature of systems, the account conceives system structure as an emergent phenomenon in three senses. First, it draws upon structuration theory and complex adaptive systems thinking to explain the internal organization of collective social agents. It then draws upon political economy and constructivist thought to argue that agents form emergent relational structures by which they constitute, reproduce, and transform each other. Finally, this chapter argues that worldviews, institutions, and technologies constitute ‘emergent schematic assemblages’ as diffuse social entities in themselves. This ontology ultimately highlights actor differentiation, interaction capacity, and emergent schematic assemblages as core features of world order. The third chapter applies this ontology to argue that there are three broad sets of conflicts embedded in the system structure of world order which each evolve, erupt into violence of a particular character, and differentiate social actors in ways shaped by the broader features of world order (particularly its worldviews, institutions, technologies, and interaction capacity). World order shapes the consequent violent conflicts, but those violent conflicts also reshape world order, generating a co-evolutionary relationship. This framework helps explain several major trends in the nature of violent conflict by highlighting systemic influences on the formation of units and their vertical differentiation. Chapter Four further develops the links between globalization and violence by examining the rise of organized crime and of reactionary fundamentalist identity movements. It argues that these examples suggest possible future trajectories in the co-evolution of world order and violent conflict by challenging statehood as a basic organizing logic and by producing violence that is ill captured by basic notions of war, yet rivals its lethality.