Probing Dark Matter from the Galaxy to the Cosmic Web 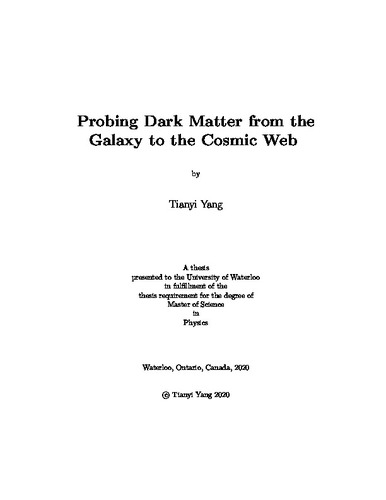 Dark matter, although invisible, accounts for the majority of matter of the universe. How this invisible component affects cosmic structure formation is one of the primary lines of inquiry in physical cosmology, and the key to understanding its nature. In this thesis, we present two methods to probe dark matter from the Milky Way to the filaments of the cosmic web. In the first part of this thesis, we demonstrate how to use stellar clustering in action space to probe the underlying gravitational potential of the Milky Way's dark matter halo. Provided that the correct potential is used for the system, integrals of motion such as action variables of small structures (for instance the tidal streams surrounding the galaxy) are conserved during galaxy formation and evolution. If the incorrect potential is applied, action variables will not be conserved, weakening the small-scale clustering in the action space. Conversely, the correct potential is expected to maximize small-scale clustering in action space. After justifying the viability of this idea using simulations, we apply this method to the 2nd data release from Gaia mission, and use it to measure the fraction that the halo contributes to the total centrifugal force at solar position, f_h, and logarithmic slope, α, of a power-law dark matter halo profile. We use stars within 9-11 kpc and 11.5-15 kpc from Galactic centre, and find the power-law potential, which is parametrized by f_h and α, is (f_h, α)= (0.391±0.009, 1.835±0.092) and (0.351± 0.012,1.687± 0.079) respectively. We then use the best-fit potential to compute the total circular velocity of the Milky Way within R = 9-15 kpc. The resulting circular velocity curve is consistent with past measurements (although it is ~ 5-10% lower than previous methods based on masers or globular clusters). To our knowledge, this is the first study that applies this methodology to real data. Furthermore, by constraining the Milky Way potential, our result indirectly shows the existence of dark matter halo around Milky Way. On cosmological scales, massive dark matter halos are expected to be connected by bridges, known as filaments. Like other large scale structures in our universe, filaments are expected to be dominated by dark matter, making them hard to detect. But are these filaments any darker than other structures, such as voids, clusters and galaxies? In the second part of this thesis, we investigate how ``bright'' these dark filaments are, which can be characterized by their mass-to-light, or M/L ratios. We first estimate the mass of these dark filaments via weak gravitational lensing: stacking and analyzing the weak lensing signals between Luminous Red Galaxy (LRG) pairs selected from SDSS III BOSS survey. Using the CFHTLens shape measurements, we measure the mass of filaments at a significance level of 4.5σ. To isolate the filament signal, a catalogue of non-physical projected pairs is constructed. Then, we investigate the average luminosity level of filaments by subtracting the stacked non-physical pairs from the stacked LRG pairs selected from the BOSS survey. We fit a Schechter function over the observed excess galaxy number in filaments, and so, compute the total luminosity in SDSS r and g band. Then, we calculate the mass-to-light ratio, M/L, and the colour (g-r). To investigate the redshift dependence of these parameters, the above analyses are conducted in two independent redshift samples (LOWZ and CMASS as divided by BOSS survey). We find M/L = 309±94, (g-r) = 0.59±0.24 for LOWZ sample, and M/L = 435±189, (g-r) = 0.38±0.45 for CMASS sample. If we combine both samples, we find M/L = 351±87, (g-r) = 0.51±0.22. Due to the uncertainties, we find no significant redshift dependence of these parameters. Our study provides the first measurement of the mass-to-light ratios of filaments of the cosmic web, showing that they are comparable to the cosmic mean value.