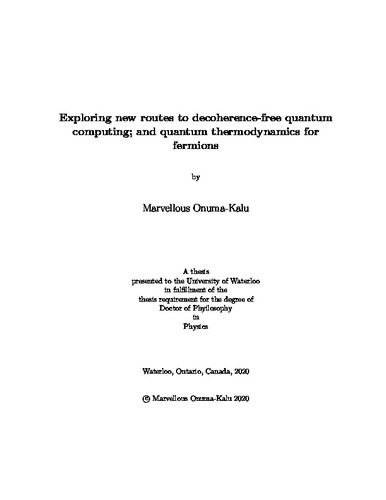 This thesis has two parts; the first part is a contribution to the research field of quantum measurement in quantum optics while the second part focuses on quantum thermodynamics for fermionic systems. The aim of the research on quantum optics is to detect and subsequently characterize quantum states of light. Specifically, we focus on characterizing 1) entanglement between a two-level atom and superposition of coherent states (known as Bell cat state) 2) quantum superposition of coherent states (Schr\"odinger cat states). The photon is the particle of light which carries quantum information; it is usually lost (destroyed) while being detected. Many physical implementations of quantum logic gate aim to encode quantum information processing into large registers of entangled qubits. However for these larger much distinguishable states, creating and preserving entanglement becomes difficult due to rapid onset of decoherence. Encoding quantum information on Schrodinger's cat states take advantage of a cavity resonators much larger Hilbert space, as compared with that of a two-level system. This architecture allows redundant qubit encodings that can simplify the operations needed to initialize, manipulate and measure the encoded information. For such a system to be viable as a quantum computing platform, efficient measurement of such encoded qubit observables must be possible. The concept of quantum non demolition measurement was introduced to evade the problem of decoherence. Researchers now know through quantum theory that it is indeed possible to count photons in a given state of light without destroying them. This nondestructive measurement scheme is coined in the term ``quantum non-demolition measurement". We can extend the ideas of quantum nondemolition measurement scheme to detect a system made up of two or more quantum states (not necessarily states of light) that are combined based on the superposition principle. An example is the Schr\"odinger's cat state which is a superposition of two coherent states of light of equal amplitudes but opposite phase. At this point, one is not only interested in counting photons, but in understanding the nature of the superposition, the possible problems and the different physical properties that follow. Ways to detect the Schr\"odinger cat states and subsequently a Bell cat state (Schr\"odinger cat entangled with a qubit) without significantly perturbing them are discussed. The method analyzed is the mode-invisibility measurement scheme earlier proposed to detect single Fock states and coherent states of light. The method gives a new insight to the known properties of Schr\"odinger cat states and contributes to our understanding of the quantum-classical boundary problem. The second part of the thesis falls in the research field of quantum thermodynamics and open quantum systems. Most problems in quantum thermodynamics have been explored in bosonic systems with little or less done in fermionic systems. Therefore the aim of this part of the thesis is to explore related quantum thermodynamical problems in fermionic systems. I begin by considering the problem of work extraction from noninteracting fermionic systems. For work to be extracted from the state of a quantum system, a unitary operation on the state must act to reduce the average energy of the system. Passive states are those states whose energy cannot be reduced through unitary transformation, that is work cannot be extracted via unitary transformations given only a single copy of the system. It follows that some passive states may have extractable work if several copies of the system is processed. Passive states for which no work can be extracted, no matter the number of available copies, are called completely passive states. An example is the thermal Gibbs state. Here, the limit for which multiple copies of passive states in fermionic systems can be activated for work extraction is studied. It was observed for n > 3 fermionic modes at the same frequency, the product state of n thermal states with different temperatures is not passive. This in principle implies that the construction of a heat engine in fermionic systems need access to three thermal baths at different temperature. This is unlike the bosonic system, where access to only two thermal baths are required. On the other hand, while the product state of three thermal states of three fermionic modes at the same frequency but different temperatures is not passive, the unitary transformation required to extract work from the state is difficult to realize. A set of operations that are easier to realize are Gaussian unitaries which are generated by Hamiltonian that are at most quadratic in the system's operators. One may consider extracting work via the restricted class of Gaussian unitaries. Hence fermionic Gaussian passive states for which energy cannot be extracted using only Gaussian operations are characterized. The last problem I investigate is that of understanding the dynamics of an open Markovian non-interacting fermionic system. I introduce a classification scheme for the generators of open fermionic Gaussian dynamics and simultaneously partition the dynamics along the following four lines: 1) unitary vs. non-unitary, 2) active vs. passive, 3) state-dependent vs. state-independent, and 4) single-mode vs. multi-mode. Unlike in the bosonic case where only eleven of these sixteen types of dynamics turn out to be possible, one observe only nine types of dynamics in the fermionic setting. Using this partition I discuss the consequences of imposing complete positivity on fermionic Gaussian dynamics. In particular, I show that completely positive dynamics must be either unitary (and so can be implemented without a quantized environment) or active (and so must involve particle exchange with an environment).