Of the River: Unraveling Imaginaries of Water & Resilience in Metro Manila 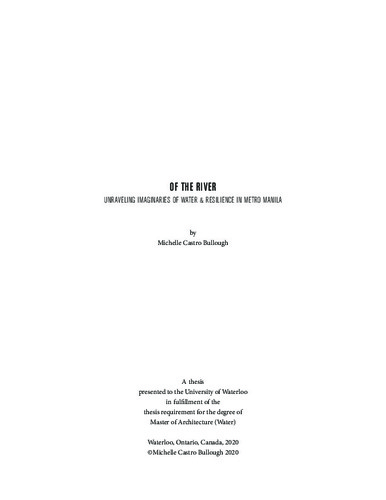 Metro Manila, the Philippines’ capital, emerged from the river delta—bisected by an estuarine river and laced with rivulets. For a long time, the city embraced its wet geography and was adapted to the soak of torrential rains. However, now these rains don’t just soak the city, they flood it, marking a profound shift in perception and intervention. While its location puts it at hydrometeorological risk, exposure to interacting factors have intensified its vulnerability. As the city has confronted its landscape, many ideas of what water management and resilience should look like have been projected onto its flood infrastructure. Positioned within the intertwined nature of design, environment, and politics, Of the River unravels the imaginaries that have shaped Metro Manila’s waters. This thesis uses the Pasig River, which cuts through five municipalities, as an axis for analysis. Rather than a river that strings together two coasts, the Pasig can be seen as Metro Manila’s estuary—a third coast—which has the potential to reframe understandings of the city’s past and future. By chronicling the coevolution of the city and its water, this thesis refutes reductive attitudes of the issue by framing Manila’s waters as the product of a much longer transformation—one articulated by underlying social, political, and economic conditions. The interplay of these conditions has manifested in top-down strategic infrastructure that excludes large portions of the population, creating a hazardscape of marginalization and displacement. Contesting this inequity, people have countered with bottom-up tactics, which are numerous but underequipped. In response, this thesis reflects on a productive meso-level between macro-scale built projects and micro-scale social efforts. The goal of this thesis is not to provide a solution to the flooding that Metro Manila experiences, but rather to probe its strategies and priorities. In unpacking how the city has characterized water and resilience, the intention is to uncover and challenge who imaginaries should serve.