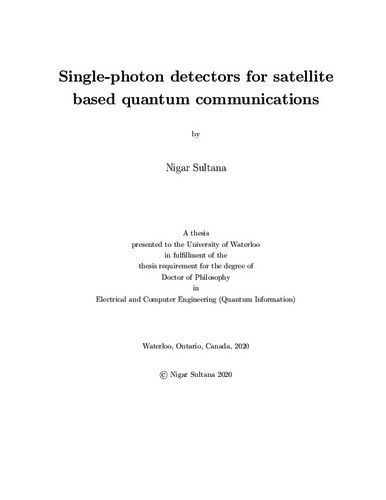 With the growing use of online communications in our modern society, information security is becoming a big concern. Along with that, the progress in quantum computers is posing severe threats to such communications. Once powerful quantum computers are available, most of today's encryption schemes, which are based on computationally hard problems, will be broken within a short period. Researchers are therefore making a great effort to establish quantum-safe encryption schemes. One such scheme is quantum key distribution (QKD), which utilizes the laws of quantum mechanics. These cryptography protocols offer unconditional security to the communication between two distant parties by providing a secure way of sharing encryption keys between them. While over the last few decades QKD has continuously progressed, it is limited to a distance of up to several hundred kilometers using terrestrial quantum links. Satellites are therefore being considered to extend the QKD range for global coverage, although implementations of the satellite-based QKD infrastructure are still in their early stage. There are many aspects of QKD that need further assessment and advancement for establishing long-term satellite-based quantum communication (QC). My thesis works were focused on developing advanced systems for single-photon detectors and quantum sources. Single-photon avalanche diodes (SPADs) are the most viable option for satellite-based quantum communications. They must travel to outer space either for receiving quantum-states in the ground-to-satellite QC or for characterizing the quantum-sources in the satellite-to-ground QC. However, while in space, SPADs exhibit damage caused by the space radiation that gradually increases their dark counts. Performing QKD is not possible when the dark counts exceed a specific threshold. Hence, methods of reducing the detectors' dark counts by mitigating the damages would help to extend the SPADs' in-space useful lifetime. Laser annealing is one such effective method, found in lab experiments, to heal the radiation-induced detector damages. We now aim to carry out this method in low Earth orbit (LEO) to verify its in-orbit effectiveness. On that goal, we are building an annealing payload (APL) for a cube satellite (CubeSat) in collaboration with the University of Illinois at Urbana Champaign (UIUC). We, the University of Waterloo team, built one of the two segments of the APL-- a space-qualified detector module containing two Excelitas C30902SH and Excelitas SLiK detectors. Our miniaturized and compact module integrates the facilities required for the detector operation and laser annealing, as well as an active detector temperature control system. The operation of the detector module is highly flexible and software controllable. Our detector module will work together with the control board containing the laser annealing system (built by the UIUC team). Once the satellite has been launched in 2020, the in-orbit experiment will enable us to study the in-space SPAD radiation damage and their healing using the integrated annealing system. During a second project, we designed and built a new simple readout circuit for the negative feedback avalanche diodes (NFADs), which are free-running single-photon detectors at telecom wavelengths. These detectors suffer from strong afterpulsing effects, which limits their overall performances. Therefore, our readout system incorporates features to suppress NFAD afterpulses. We also used this custom readout to characterize two NFADs (from Princeton Lightwave) and assessed the performance of the new electronics. Our analysis showed that even at higher detection efficiencies, a 20 $\mu$s hold-off time after each avalanche event is enough to extensively reduce the number of afterpulses and to keep the dark count rate below 100 Hz at 192 K temperature. Both the detectors showed timing jitter of less than 75 ps FWHM at their maximum efficiencies. The best figure of merit is found to be 1.6$\times 10^7$, which is comparable to that of the high-performing superconducting nanowire single-photon detectors. This result demonstrates the suitability of our readout and the NFADs in various quantum optics applications, such as in long-distance quantum key distribution, where the detection rate is usually low. We then performed a blinding attack, which enables an Eavesdropper in QKD to gain information on the key, on these NFADs using bright illumination. These detectors are usually threshold detectors that generate a click when the optical power is above a certain threshold, otherwise they do not click. Blinding attack utilizes detectors' inability to resolve the photon numbers. During the experiment, we sent controlled optical pulses with a high time resolution to deterministically force detection at the detectors. The result demonstrated the NFADs' susceptibility to these attacks, which tells us to include countermeasures into the system to protect the communications. Finally, we built a quantum source to produce 785 nm polarized photons to implement decoy-state BB84 QKD. Our source utilized the sum-frequency generation scheme to generate 785 nm laser pulses. Its modulator system includes an intensity modulator and two-phase modulators in the Mach-Zehnder configuration to prepare polarized quantum states with different intensities. Our source provides a repetition rate of 500 MHz, which was successfully used in an airborne QKD demonstration with a moving receiver up to $10~ km$ distance. To summarize, my research projects are a contribution to the development of advanced devices, particularly single-photon detectors for quantum communications.