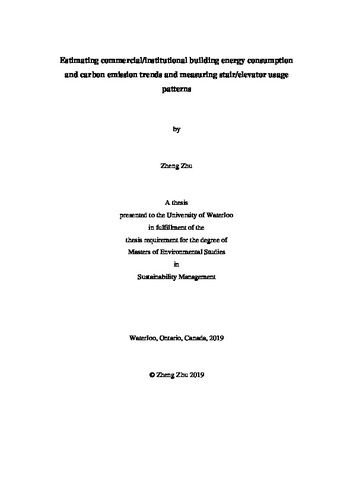 This study identified energy/emission baselines for comparison to the potential savings of new zero carbon buildings. In addition, tenant behavior was studied to see whether the usage of elevators and stairs changed from the initial office buildings to the new zero carbon building. Buildings are one of the largest energy users in many countries. As a result, it is essential to find ways to save energy and reduce emissions from buildings in order to achieve national emission reduction goals. Improvements in energy efficiency and carbon savings have already been demonstrated in building science research. In addition to the technology in the building envelop and heating/cooling systems, the choices made by users are important factors of overall building performance. In this study, one discretionary choice will be examined in detail: will people use a prominent central staircase instead of using the elevators? A certified Zero Carbon Design Office Building in Waterloo will be examined as a case study to determine whether moving into a high-performance building is associated with a corresponding change in pro-environment behavior, namely, the use of central stairs instead of the central elevators. Tenants of this new building include local businesses, a cleantech incubator, an environmental nonprofit organization and university groups. A five-year research plan was made for the case study and the building has served as a “living lab” for researchers to study the energy/emission performance improvements as well as behavior changes. This study has two main parts. First, the energy/emission baselines for the tenants were calculated based on the previous years’ data from the tenants’ old buildings. The main purpose of establishing the baselines was to identify the potential energy/emission savings. Second, human behavior changes were studied through the observation of tenant elevator and stair usage ratios. In previous literature, it was indicated that the preference of sustainable behavior – using stairs instead of elevators in office buildings – was complicated and affected by multiple factors such as building design, demographics, and interventions (engagement workshops/activities). In this study, the relationships between the use of elevator/stairs and some of the effective factors were identified, and a stair/elevator usage ratio was calculated. Finally, the energy consumption of using elevators in the zero carbon building was calculated. The results of this study showed that design influences behavior as a prominent central stairs can increase the proportion of people using stairs by 42%. The combination of net zero carbon building and general interventions (sustainability workshops) to encourage sustainable actions corresponded with increased stair use by 5% compared to pre-occupancy levels. Multiple factors affected people’s stairs choices: people on the second floor used stairs 29% more than those on the third floor; and people took the stairs 16% more often when descending compared to ascending.