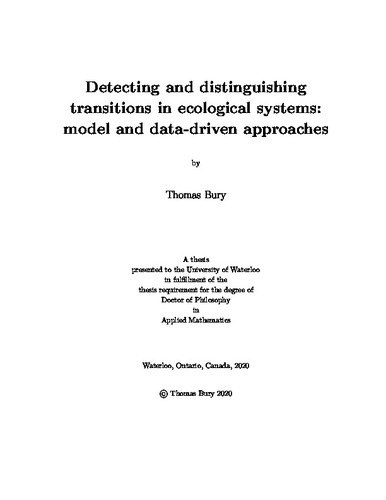 There exists a plethora of systems that have the capacity to undergo sudden transitions that result in a significantly different state or dynamic. Consider the collapse of fisheries, outbreak of disease or transition to a 'Hothouse Earth' to name a few. The common factor among these transitions is mathematical - they are the result of crossing a bifurcation point. This thesis is concerned with the detection and description of these bifurcations from time series data, and the mechanisms that lead to these transitions. We begin in the domain of climate change, where models of the climate system are extremely sophisticated, but those that incorporate social dynamics and its two-way coupling with climate dynamics are lacking. In developing a simple socio-climate model, we show how mechanisms such as social learning, social norms, and perceived mitigation costs play a major role in climate change trajectories. These social effects can strongly determine the predicted peak global temperature anomaly, how quickly human populations respond to a changing climate, and how we can chart optimal pathways to climate change mitigation. However, we also show that if the climate model is subject to a tipping point, the climate can transition to a new state before mitigating behaviour becomes sufficiently widespread to prevent the transition. This motivates a need for early warning signals (EWS) of tipping points. Hence, in the next chapter we focus on the development of EWS in time series data that can be used to detect an upcoming bifurcation. This thesis develops two 'spectral EWS', which are derived from the power spectrum. We show that the peak in the power spectrum provides a more sensitive and conservative EWS when compared to conventional metrics, and the shape of the power spectrum, quantified using AIC weights, provides clues as to the type of approaching bifurcation. We validate these spectral EWS with empirical data from a predator-prey system. Finally we focus on EWS for population extinction, where we study the efficacy of EWS in seasonal environments. We find that conventional EWS prevail under seasonal environments, however asymmetries exist in higher-order metrics such as skewness and kurtosis that could be used to distinguish the driver of extinction. To conclude, nonlinear behaviour arising from social learning and social norms yield bifurcations that have profound impacts on future trajectories of climate change, and bifurcations can be anticipated across a wide range of systems using spectral EWS, that also provide information on the type of bifurcation. The further development of generic and system-specific EWS will play an important role in preserving healthy ecosystem functioning in the Anthropocene.