Do we need a new perspective on chronic diseases? The combined effects of workplace stress and socioeconomic status as non-traditional disease risk factors in Canada 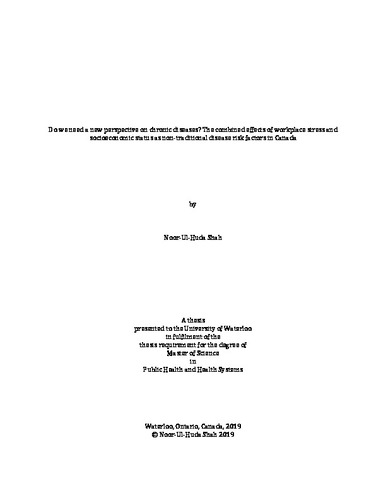 Background: Approximately 80% of Canadians over the age of 20 are at risk of developing a chronic disease (CD) such as cardiovascular disease (CVD) and type II diabetes (T2D) (Artham, Lavie, Milani, & Ventura, 2009; PHAC, 2017; Yach, 2004). The burden of CD is not distributed equally amongst Canadians either, with those from lower socioeconomic status (SES) backgrounds having higher CD outcomes and poorer health overall (Patra, 2007). Although the role of stress has often been implicated in the development of CVD and T2D, research on the combined effects of stress and SES is lacking in Canada (Cotter & Kelly, 2018; Crompton, 2011; Ferris, Kline, & Bourdage, 2012; Guan, Collet, Mazowita, & Claydon, 2018; Hughes, Lu, & Howard, 2018; Smith, Frank, & Mustard, 2008; Steptoe, Siegrist, Kirschbaum, & Marmot, 2004). The highest source of stress amongst Canadian adults is reported to be due to work instead of finances; therefore, workplace stress and SES might have cumulative effects that can increase the odds of developing CVD and T2D (Kivimaki & Kawachi, 2015). Objective: This study investigated if self-reported stress levels and measures of socioeconomic status (including household income, household education level, and occupational type) were significantly associated to self-reported diagnosis of CVD and T2D, even after controlling for traditional risk factors: smoking status, alcohol intake, fruit and vegetable intake, and physical activity (Pouwer, Kupper, & Adriaanse, 2010). Further analysis sought to investigate the combined effects of both SES and workplace stress on CD outcomes by calculating the magnitude of their multiplicative interaction and additive interaction via reporting the relative excess risk due to interaction (RERI). Methods: A cross-sectional analysis was conducted through multivariate logistic regression analysis using a bootstrapped weighted sample of 78,023 respondents from the Canadian Community Health Survey (2015-16). Models initially controlled for age, sex, race or cultural background, and body mass index (BMI), and subsequently the traditional risk factors to understand the true association between stress and SES on CD outcomes. Combined effects of both main variables were assessed using multiplicative and additive interaction analysis. Results: Outcomes from logistic regression analyses showed a significant association between perceived life stress and all aspects of SES for both CVD and T2D. Perceived life stress and SES remained significantly associated to both CD outcomes even after adjusting for traditional behaviour risk factors. A significant interaction between high life stress and low household income showed almost double the odds of reporting diabetes (OR=1.89, p=0.03), compared to the product of the individual factors alone. Results support that perceived stress and SES might have independent associations to CD outcome and together they might have cumulative effects on health. Conclusion: Our results corroborate other findings that stress and SES might have independent associations to CD outcomes, even in the absence of traditional disease risk factors. These results highlight the importance of understanding the cumulative effects social and economic factors in exascerbating CD outcomes. To our knowledge, this is the first Canadian study to show the cumulative effects of perceived stress and SES on outcomes of CVD and diabetes, and why we might need to change our approach to combat incidence of CDs.

Noor-Ul-Huda Shah (2020). Do we need a new perspective on chronic diseases? The combined effects of workplace stress and socioeconomic status as non-traditional disease risk factors in Canada. UWSpace. http://hdl.handle.net/10012/15526