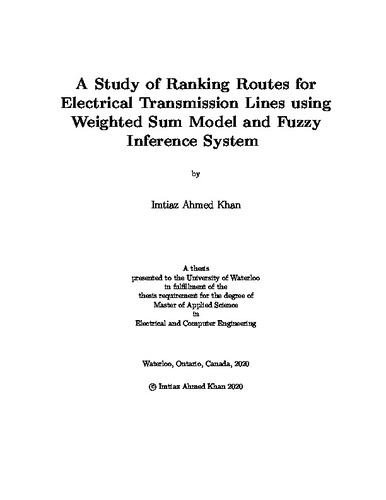 Selecting a route is the ﬁrst step in building a new electrical transmission line. The most common practice in selecting a route involves ranking possible route options, which is a complex process demanding many decision considerations be taken into account. Even to this day, the ranking process is mainly done manually by humans using printed maps and ﬁeld surveys, making it time-consuming and prone to errors. This thesis studies the most common decision considerations that aﬀect the process of ranking a set of route options and classiﬁes them into four main categories. Then, the work proposes a methodology to automate the process of ranking routes for an electrical transmission line and implements it using Geographic Information System (GIS), image processing techniques, and Weighted Sum Model (WSM). It evaluates the eﬀectiveness of the methodology by comparing the results obtained with industrial results of an actual project in Saskatoon, Canada. The preliminary results are very promising. Out of ﬁve route options, the proposed methodology ranks the top two options accurately, and it successfully identiﬁes the least-preferred route options. To validate the methodology further, the thesis generates synthetic data and tests it with various simulated scenarios. The work generates random routes and hypothetical features, using perturbation and image processing techniques, to test the methodology with more route options and decision considerations, respectively. In the process of validation, it also improves the accuracy of the methodology by reﬁning the WSM. The methodology with reﬁned WSM successfully outputs expected results when tested with one hundred and ﬁfty ﬁve routes and taking six decision considerations into account. The thesis also implements and tests the methodology using Fuzzy Inference System (FIS), instead of WSM, to mimic the human decision process and to allow users to dictate the importance of diﬀerent decision considerations using linguistic variables. It then compares the two methods and discusses their advantages and disadvantages. Both methods perform well and have around 80% similarity in the outputs produced. However, they are both unique in their own ways. FIS allows users to describe their preferences using linguistic variables making it more user friendly, while, WSM is more predictable and easier to ﬁne tune results. Thus, the thesis presents two ways of automating the process of ranking routes for an electrical transmission line.