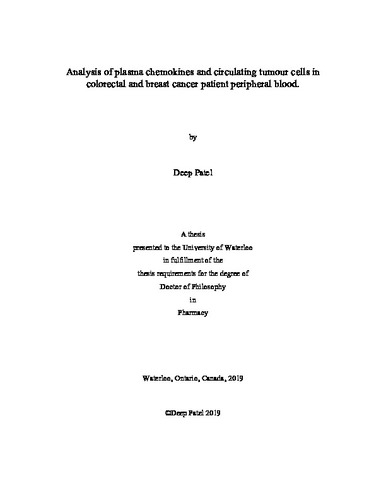 Circulating tumour cells (CTCs) provide a prognostic value in solid tumours including colorectal and breast. Enumeration of tumour cells from blood is becoming a common practice in informing prognosis and may guide therapy decisions. Enumeration alone does not capture heterogeneity of tumours and varying functional abilities of the CTCs to interact with the secondary microenvironment. Characterizing the isolated CTCs and assessing their functional abilities can track molecular changes in the disease progress. As a step toward identifying functional features of CTCs that could aid in clinical decisions, this study was aimed at analyzing chemokine release profile in drug resistance and developing a CTC isolation technique based on extracellular matrix interactions. Cancer cells release different chemokines and express chemokine receptors which together work to direct cell infiltrates in the tumour microenvironment. This work examined changes in the profile of chemokine release using a model of drug resistance based on the colorectal cancer cell line HT29 and its counterpart HT29-R that is resistant to the late-stage chemotherapy drug irinotecan (SN-38). Following an initial screening of mRNA expression through PCR and qPCR, five of the chemokines (CCL2, CCL15, CXCL8, CXCL12, and CCL20) were analyzed further for their release patterns amongst cell lines and peripheral blood of healthy volunteers and stage IV colorectal and breast cancer patients. The release pattern of chemokines in patient samples differed from the results of the in vitro drug-resistance model. Specific tumour location, previous therapies, and genetic variability are all examples of the factors that may provide unique patterns and complicate modelling for chemokine release in late-stage cancer. A detailed analysis revealed an upward trend for midkine (NEGF2) when baseline and 12 months plasma samples were compared. Migration studies may further reveal the consequences of this expression profile. Migration assays were carried out with Transwell® chambers and HepG2 cells to partially mimic the hepatic microenvironment. Such studies can guide future functional studies for isolated CTCs. We next sought to investigate extracellular matrix protein interactions, which might depend on a changing chemokine milieu. We utilized cancer cells’ ability to adhere to extracellular matrix and created a platform to isolate CTCs from the peripheral blood samples. A total of 14 colorectal and 7 breast cancer patients donated blood samples. Adhesion assays were performed with a range of different ECM proteins. We identified an optimal ECM substratum composed of collagen and fibronectin at a mass coating ratio of 2:1. The isolated CTCs were identified through immunofluorescence with epithelial marker antibodies (EpCAM and pan-cytokeratin). Identification of CTCs was further confirmed by exclusion with a hematopoietic origin marker CD45. The captured number of cells ranged from 0 to 296, whereas the mean number was 26 and the median was 22 per patient sample (~8mL). This technique not only allows enumeration, but also isolates cells based on a functional approach. The isolated cells are successful in adhering to extracellular matrix proteins and can be further characterized through functional markers. Overall, this study addresses two unique functional features of CTCs – their expression of certain chemokines and their ability to interact with both fibronectin and collagen - that form the basis to provide future clinical utility. Such an approach will help to inform clinicians about the aggressive nature of an individual tumour and guide treatment decisions toward best prognostic outcomes.