Microbial communities of wastewater in the Canadian Arctic 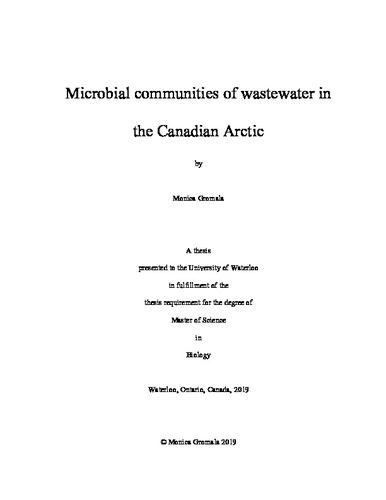 Wastewater management in the Canadian Arctic is challenging due to the extreme climate and lack of conventional treatment system infrastructure. To resolve these issues, most Northern communities use waste stabilization ponds (WSPs) as their sole form of wastewater management. In this type of system, wastewater is collected directly from buildings year-round and is transported to the WSP where it is discharged directly into the environment. For approximately nine months of the year, the wastewater remains frozen due to sub-zero temperatures. As the temperature increases in the spring, ice begins to melt, allowing the wastewater to thaw and flow into downstream lakes. Increased sunlight and increased water temperatures stimulate microorganisms to naturally breakdown the various components of the wastewater and reduce concentrations of macronutrients, such as nitrogen and phosphorus. The two to three months during which temperatures remain above zero are collectively referred to as the treatment season as the majority of aerobic and anaerobic degradation occurs during this time. Currently, the microbial communities of Arctic WSPs are not well understood. Identifying the major microorganisms in the microbial communities of these WSPs is important for understanding whether the wastewater treatment system is effective in the removal of wastewater contaminants from effluent water flowing into downstream lakes. This research aims to characterize the microbial community and identify wastewater indicator organisms of three Arctic WSPs in Baker Lake, Cambridge Bay, and Kugluktuk in Nunavut, Canada, with a focus on the Baker Lake WSP and the downstream lake system. In Baker Lake, wastewater is discharged into a lagoon, where water is able to flow into downstream lakes before ultimately discharging into Baker Lake. Several sites across this entire system, as well as three reference sites were sampled and analyzed to produce baseline taxonomic profiles. This was achieved through 16S rRNA gene and metagenome sequencing, and subsequent taxonomic assignment to 16S rRNA gene amplicons, metagenome sequences corresponding to the rpoB gene, and metagenome-assembled genomes (MAGs). Both temporal and spatial variation were observed across Baker Lake sampling sites, with clear differences in microbial community composition at samplings sites at the phylum, family, and ASV levels. These trends were observed in each of the 16S rRNA gene, rpoB gene, and MAG taxonomic assignments. Wastewater indicator species were identified for the Baker Lake WSP and these indicator microorganisms were not detected in most downstream sites. The three WSPs were also found to have very different microbial communities, with few overlapping ASVs. Despite these differences at the ASV level, the three WSPs contained common groups of microorganisms and microbial community profiles were distinct from Arctic freshwater lake samples. Most of the ASVs detected in all three WSPs belonged to the phylum Proteobacteria, which had a relative abundance of >50% in nearly all WSP samples. The proportion of Proteobacteria was much lower in lakes found downstream of the Baker Lake WSP. In receiving waters and reference lakes, Bacteroidetes, Actinobacteria, Planctomycetes, and Verrucomicrobia were more prevalent.Wastewater is known to be a hotspot for antibiotic resistance gene (ARG) dissemination and evolution. This thesis also aimed to identify and quantify ARGs within the WSPs, receiving waters, and reference lakes to determine if ARGs were enriched in samples containing wastewater. Eight gene families related to macrolide resistance, and one gene related to class A betalactamases were detected at higher abundance in wastewater samples than in downstream and reference lakes. Metagenome sequences related to these ARGs were also found to be in bins associated with five MAGs. This research is an important step in the characterization of microbial communities of wastewater in Arctic WSPs. The taxonomic profiles of the WSPs from Baker Lake, Cambridge Bay, and Kugluktuk provide important baseline data that will assist with monitoring of the wastewater system and gives insights into the efficacy of WSPs as the sole wastewater treatment system for communities in the Arctic. This research will aid in tracking changes in microbial communities as operational and infrastructure upgrades are made to the Baker Lake waste treatment system, to help with developing a safe and effective wastewater treatment system.