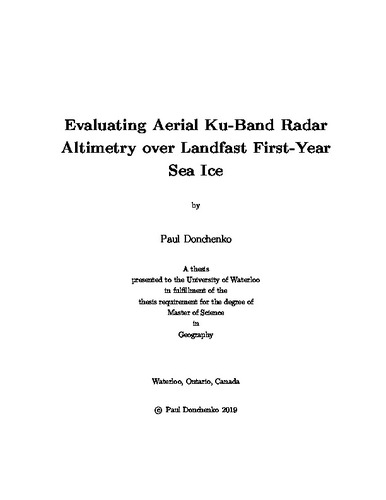 Recent studies have challenged the assumption that Ku-band radar, used by the CryoSat-2 satellite altimetry platform, fully penetrates the dry snow cover of Arctic sea ice in the winter. There is also uncertainty around the proper technique for handling retracker threshold selection in the Threshold First-Maxima Retracker (TFMRA) method which estimates the ice surface elevation from the radar echo waveform. The purpose of this study was to evaluate the accuracy and penetration of the TFMRA retracking method applied to ASIRAS (an airborne version of CryoSat-2's SIRAL sensor) radar altimetry returns, investigate the effect of surface characteristics and explore methods for improving the accuracy. The ice surface elevation estimate from ASIRAS was evaluated by comparing to the snow surface measured by aggregating laser altimetry observations from the Airborne Laser Scanner (ALS), and the ice surface measured by subtracting ground observations of snow depth from the snow surface. Due to the lack of a surface that could be used to calibrate the ASIRAS and ALS elevations, the location of the waveform relative to the observed snowpack boundaries could not be reliably established. The accuracy, penetration and the effect of surface properties were examined by investigating patterns that were consistent among different alternative calibration methods. The perceived penetration of the ice surface estimate was found to increase with the retracker threshold and the function of the relationship dependent on surface properties. The slope of the trend was increased by a deformed ice surface, a deeper snow cover, an absence of salinity and a larger snow grain size. As a result, the ideal retracked threshold, one that would achieve 100% penetration, varies depending on properties of the surface being observed. Under conditions such deep snow or a large grain size, the retracked elevation $s_r$ was found in some cases to not penetrate fully the snowpack. This would cause an overestimation of the sea ice freeboard and as a consequence, the sea ice thickness. Results suggest that using a single threshold with the TFMRA retracking method will not yield a reliable estimate of the snow-ice interface when observed over an area with diverse surface properties. However, there may be potential to improve the retracking method by incorporating knowledge of the sensed surface. Characteristics of the waveform that described its shape, such as the return width and pulse peakiness, were found to be correlated with the estimate error and penetration. These could be combined with remotely sensed surface properties, such as the ice deformity, to select an ideal retracker for individual returns with an additional offset to account for the incomplete penetration of Ku-band over appropriate surface