Considering the surface: writings on people, occasion, space and place 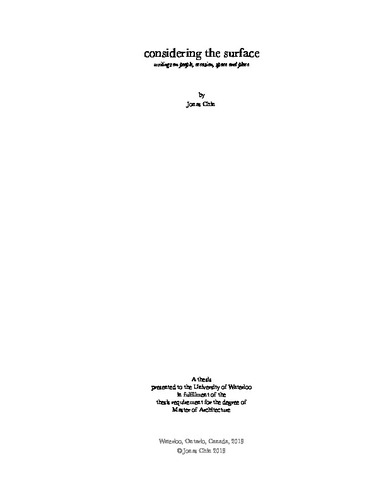 The following collection of writings reflects on people, occasion, space and place. Together, the writings explore how we might respond to and design for human presence. The human figure, as used in architectural representation, is employed within speculative sketches of urban life to consider the ways in which human presence might be revisited as a driving factor in design. By depicting figures in relation to their surrounding surfaces while engaged in eminently human routines such as dining, these writings aim to reimagine the ways in which we inhabit space. The human body is a familiar measure for communicating a space’s purpose in architectural design. In architectural representation, human scale figures provide a referential spatial scale, but also convey the architect’s intentions regarding how a space should be inhabited. The affective dimensions of human scale figures can be conceptualized through the attributes of persona, form, movement and presence: the components which shape how we occupy space as individuals or as a collective. Drawings of human expressivity that isolate these four attributes evoke radically different understandings of the same space. A series of recollections from my own dining experiences—at a range of scales and settings—explore the portrayal of human presence within architectural space. As one of the most fundamental ways in which we come together, dining is a globally shared experience necessary to life and culture. This archetypal experience can reveal consistent patterns in the affective connections between objects, humans and space. I describe the spaces where such shared experiences take place through the occasions and objects which create these moments, to give form to the otherwise intangible dimensions of architecture. By proposing a speculative alternative to the typology of inhabitation, I question the relationship between the definitions of space in architecture and its availability for pragmatic needs. In this alternative, the affective representations of occasions create opportunities for people to reclaim space in a city of strictly regulated uses. The adaptation of their everyday lives to drastically different spatial conditions suggests how we can define spaces beyond mere dimensions and boundaries, speculating on the allowances, flexibilities and intensities of space as formed by our inhabitation. When components of space are removed from their prescribed functions, they become formal gestures that provoke unique interpretation. These formal gestures of place-making invite the human attributes of persona, form, movement and presence to define the functions of space. Descriptions of the occasions examine how these formal gestures accommodate the perspectives of distinct human attributes. The resulting language of place distills an architecture defined through human presence. This collection of writings forms a theoretical framework for human-centered place-making, opening new dialogues between the representation of architectural space and its imagined occupation.