Engineered expression system in K. phaffii for expression of human alpha-glucosidases, their characterization and inhibition 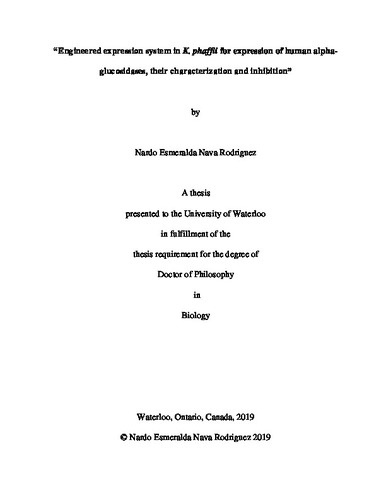 This thesis describes a progression of experiments that lead from the design of a new cloning-expression vector for K. phaffii, to the successful expression of numerous human alpha-glucosidases, their characterization and inhibition with three novel compounds derived from castanospermine. K. phaffii was chosen for its numerous advantages for the expression of foreign proteins. A convenient expression vector was engineered to provide extra benefits to the system, such as a simplified construct preparation, double selection marker, and efficient purification. All these improvements, together with an optimization of the expression protocols, resulted in a yield of expression for human recombinant alpha-glucosidases in a range of 0.79 mg/L to 3mg/L in batch production, along with a significant reduction in the cloning time and a suitable selection method to identify the cells with higher number of copies of the plasmid. A collection of eight alpha-glucosidases was successfully cloned and expressed using this system. All of them showed enzymatic activity and the expected size according to their amino acid sequences and expected pattern of glycosylation. These products were used to test three castanospermine analogues, which addressed the effect of different orientation of the substituent groups and size of the side chain on selectivity among N- and C- terminal subunits of sucrase-isomaltase. This research project opens the door to future investigation not only on the expression and structure/function analysis of alpha-glucosidases, but also as a good alternative for recombinant expression of other proteins.