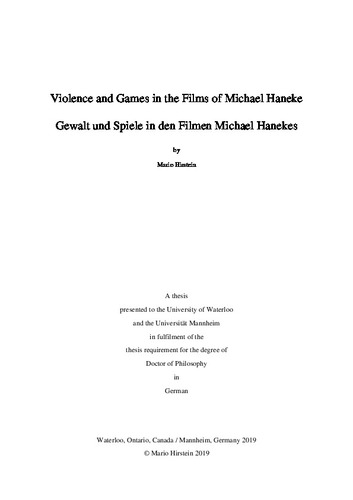 This dissertation examines the intersection of violence and games in six of Michael Haneke’s movies, Benny’s Video (1992), Happy End (2017), Le Temps du loup (2003), Funny Games (1997/2007), 71 Fragmente einer Chronologie des Zufalls (1994), and Caché (2006). Relying on Imbusch’s concept of direct and indirect violence, Galtung’s model of “structural” violence as well as canonical theories of games, such as Huizinga’s notion of a “magic circle,” a fictional space that is devoid of any real-world consequences, I argue that Michael Haneke’s films exemplify the ludic qualities that the most common forms of violence have today. The emergence of violence, which often rests on a blatant disruption of Huizinga’s “magic circle,” takes various forms across Haneke’s films. In Benny’s Video, the young protagonist learns through games to virtualize his surroundings and immunizes himself to suffering and ethical consequences. The pyramid scheme informing his actions lays bare the foundation of the film’s violence, namely the economic world order. Happy End continues and actualizes these themes in a new medial landscape: now everything seems to happen online, yet the victims of the games that the affluent protagonists play suffer in real life. Le Temps du loup highlights another violent aspect of games, their ritualistic nature. Girard’s theories on rituals and sacrifice are vital to understanding this postapocalyptic film that at first seems to subscribe to the deescalating effect of rituals but then satirizes them through its montage and incorporation of a real animal death. Funny Games explores the involvement of the audience in mind-gaming further. Not only do the two intruders Peter and Paul play violent games with the captured family, but Haneke does so with the viewers as well: the film commits violence against the audience in order to “teach” viewers to not see fictional violence as a form of entertainment. 71 Fragmente einer Chronologie des Zufalls invokes the concept of a playing god and ultimately shows the replacement of a religious worldview by an economic one. A young student, Max, is tormented by his peers who always involve him in games that require bets; the games are not played for their enjoyment but for financial gain. Finally, in Caché, we find motives from all hitherto analyzed movies of Haneke: guilt and childhood, the virtualizing effects of games and videos, ritual sacrifice, ironic employment of a “dark pedagogy” (Rutschky), and, most importantly, the ubiquity of ludic structures in the neoliberal present, which has harsh effects on underprivileged players. While games and violence are intertwined in many ways, it is especially this last point, the meta-game of economics, which conjoins both concepts. The structural violence that is inscribed in the global financial game time and again becomes visible in Haneke’s oeuvre – and Haneke’s involvement of the audience in meta-diegetic “mind games” (Elsaesser) is crucial for understanding cultural and economic violence as a constant in our daily lives.