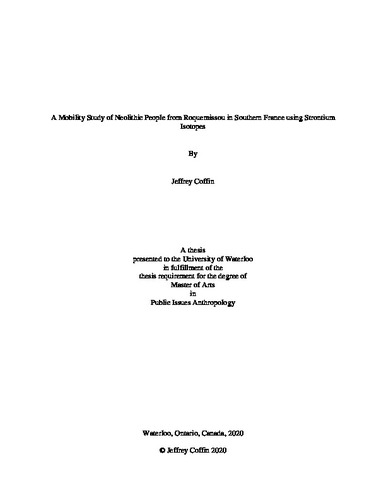 This thesis examines the patterns of changing 87Sr/86Sr isotope ratios across the growth bands of 17 third molars belonging to people buried at the site of Roquemissou in Southern France. These ratios reflect the isotopic composition of the landscape that these people inhabited during the ages of 8 to 13 when these molars developed in the maxilla. The landscape of the Massif Central - where the site is located - is quite variable in its strontium isotopic ratios, and the ratios within these teeth reflect that variation. The isotope ratios in the teeth of these individuals suggest that they come from across the Massif Central region, with only a small number matching the expected range of ratios at the site. There is some variation across the layers of enamel to suggest that a number of individuals moved around the landscape, but there are also several individuals with very stable ratios over time which indicates that they were sedentary. These data suggest that the people who lived at this time period (roughly 5000 years ago) may have adopted different subsistence strategies and migration patterns ranging from seasonal mobility to sedentism. Despite living across the Massif Central and practicing different lifeways, these people were all buried at the site of Roquemissou. This is not unusual for Late Neolithic cultures in the region and suggests that the people buried at Roquemissou shared a common cultural affiliation, despite living all across the landscape of Southern France.