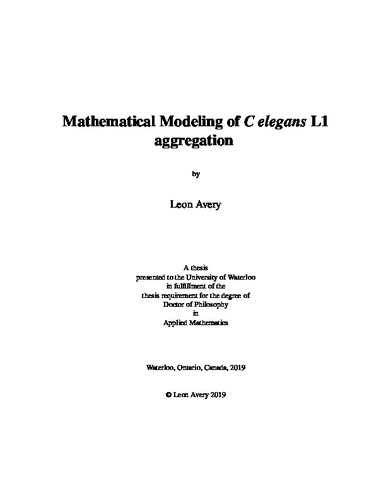 First-stage larvae (L1s) of the nematode Caenorhabditis elegans aggregate after starvation. I develop a mathematical model of this behavior based on the classic Keller-Segel model. In the Keller-Segel model, organisms emit a diffusible signal, to which they are attracted. The model is embodied in two partial differential equations (PDEs): an advection-diffusion equation for density of organisms, and a reaction-diffusion equation for the concentration of chemical signal. The PDE system has an equilibrium in which organisms and signal are uniformly distributed, but this equilibrium becomes unstable when the density of organisms exceeds a threshold, resulting in formation of aggregates. To model C elegans L1 aggregation, I develop versions of the Keller-Segel model. The Keller-Segel partial differential equations (PDEs) are solved numerically, and the results compared to observed C elegans behavior. I find that I cannot reproduce observed behavior with a single attractive signal. In particular, aggregates become very large in an attractant-only model, while aggregates of C elegans L1s are fairly uniform in size (typically ca. 500 μ m diameter) and limited to a few hundred animals each. To reproduce this behavior, it is necessary to introduce a second chemical signal, a repellent, with longer diffusional range than the attractant. In addition, the model is designed to prevent density within aggregates from rising above that density at which the worms are tightly packed. With this design, two other features of actual L1 behavior are reproduced. First, the worms form disk-shaped aggregates. Second, even after long times, the density of worms outside aggregates remains low but positive. To better understand the behavior of the PDE system—its equilibria, in particular—I describe a general method for developing exact or approximate energy functionals that are stationary at equilibrium. (Some but not all of these energy functionals are Lyapunov functionals.) I use these energy functionals to analyze aggregation behavior. I also describe their use to determine the properties of equilibria, e.g. the expected geometry and arrangement of aggregates.